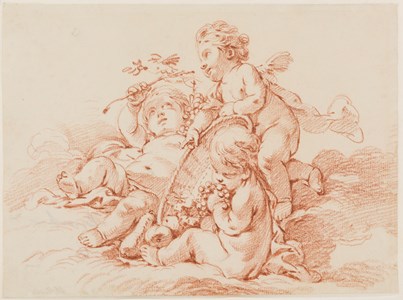 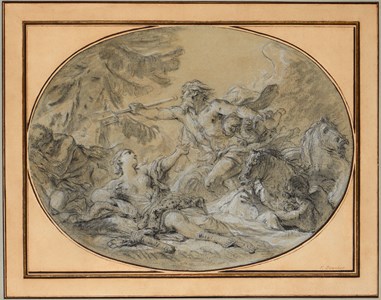 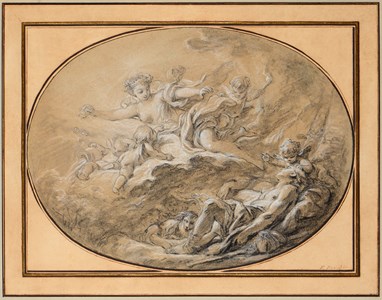 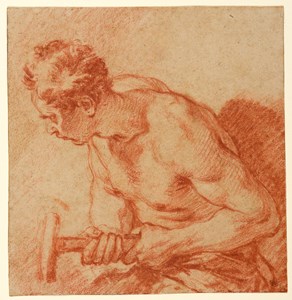 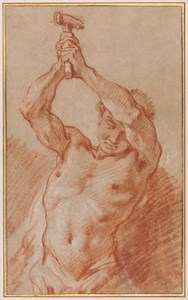 A pupil of the painter François Lemoyne and the engraver Jean-François Cars, François Boucher’s first significant project was producing numerous engravings after drawings by Antoine Watteau for Jean de Jullienne’s Figures de differents caractères…par Antoine Watteau, also known as the Recueil Jullienne. Despite winning the Prix de Rome in 1723, Boucher was unable to take up the scholarship in Italy due to a lack of space at the Académie de France in Rome. He eventually went to Rome at his own expense in 1728, lodging at the Académie de France and returning to Paris around 1731. Received into the Académie Royale in 1734, Boucher soon earned a number of significant commissions. The favourite painter of Louis XV’s mistress, the Marquise de Pompadour, Boucher painted decorations for Versailles, Fontainebleau, Marly and elsewhere, as well as several private homes in Paris. He also painted numerous easel pictures – pastoral landscapes, religious and mythological subjects, genre scenes, chinoiseries and portraits – and designed tapestry cartoons for the Gobelins tapestry manufactory, where he succeeded Jean-Baptiste Oudry as surinspector. He also provided designs for Sèvres porcelain and produced a large number of drawings for prints. In 1765 he was named premier peintre du roi, or First Painter to the King, and also succeeded Carle Vanloo as director of the Académie. By the end of his career, however, Boucher’s style had become somewhat obsolete, and had largely fallen out of favour. Among his pupils were Jean-Baptiste Deshays and Pierre-Antoine Baudouin – both of whom became his sons-in-law – as well as Jean-Baptiste Le Prince, Jean-Honoré Fragonard, Nicolas-Guy Brenet and Gabriel de Saint-Aubin. A gifted draughtsman, Boucher was as prolific as he was talented, and claimed to have produced ten thousand drawings over a career of some fifty years. One of the leading painters in France between the 1730s and the 1760s, Boucher was also one the most prolific French draughtsmen of the eighteenth century. As one modern scholar has noted of the artist, ‘Every medium served him: pen, pencil, watercolor, chalk, especially his favorite trois crayons, bistre wash, india ink, grisaille, and often a combination of several of these. No subject was too lofty or too humble to engage his attention. Whether he drew from life or from his fertile imagination…Boucher’s masterly touch is always present, always unmistakeable.’ The artist’s drawn oeuvre includes all manner of subjects, including pastoral scenes, nudes, religious, historical and mythological subjects, book illustrations, chinoiseries, landscapes, nudes, genre scenes, studies of children and heads, as well as designs for tapestries, porcelain and fountains. He produced many finished drawings as independent works, often adapting and elaborating a head or figure from one of his paintings. While his preference was for black, red, and (particularly in his later years) brown chalk, Boucher also made highly finished drawings in pastel and, at times, drew on coloured paper. A large number of his drawings were finished works for collectors and the art market, and many were engraved and reproduced in considerable numbers – often making use of new printmaking techniques that allowed chalk drawings to be reproduced with a high degree of verisimilitude - by such printmakers as Louis-Marin Bonnet, Gilles Demarteau or Gabriel Huquier. His drawings were greatly admired, and while many were preparatory studies for his paintings, others were produced as finished works of art, to be sold to collectors or reproduced by engravers. Indeed, Boucher’s popularity as a draughtsman owes much to the fact that many of his drawings were reproduced and widely distributed as engravings.