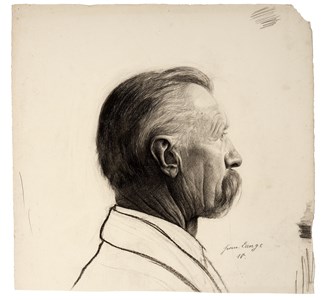 Born in a village south of Dresden, Hermann Bruno Richard Lange was active as a portrait and still life painter. A childhood accident left him paralyzed on his left side. In 1906 he was enrolled briefly at the drawing school in Dresden, but left after a year and began a period of private lessons with the Dresden painter and graphic artist Karl Hanusch. Between 1908 and 1919 Lange studied at the Akademie der bildenden Künste in Dresden, where he gained the honour of being named meisterschuler, or star pupil, of the artists Oskar Zwintscher and Carl Bantzer. From 1925 onwards he was employed as a teacher at the Gewerbeschule in the town of Freital, near his birthplace.