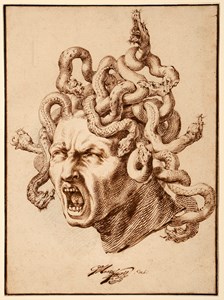 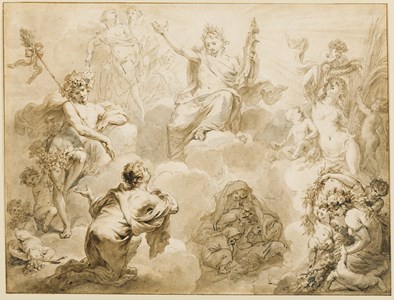 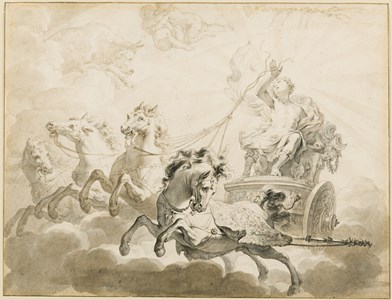 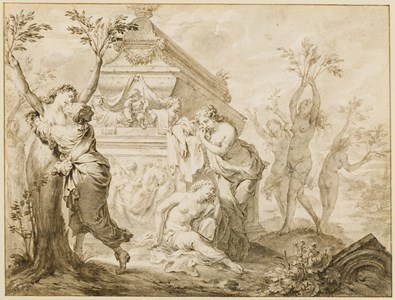 The Flemish painter and draughtsman Gotfried Maes studied in his native Antwerp with his father and with the painter Pieter van Lint. He was admitted to the painter’s guild in Antwerp in 1672, becoming dean of the guild ten years later. He spent his entire career in Antwerp, receiving commissions for altarpieces and history paintings from churches and collectors in Antwerp, Brussels and Liège. Much of his work is in a grand scale, such as a large altarpiece of The Martyrdom of Saint George, painted in 1681 for the Antwerp church of St. Joris and today in the Koninklijk Museum voor Schone Kunsten in Antwerp, and Maes may be regarded as among the last of the Flemish Baroque artists. Among his important patrons was Eugen Alexander Franz, Prince of Thurn and Taxis, for whose palace in Brussels he painted an allegorical ceiling painting glorifying the Thurn and Taxis family. Maes worked as a designer of tapestry cartoons, often in collaboration with the tapestry workshop of Urbanus Leyniers in Brussels, and also produced book illustrations and a number of etchings. One of his last major decorative projects was the ceiling decoration of the Palace of Coudenberg in Brussels for the governor of the Spanish Netherlands, Maximilian II Emanuel, Elector of Bavaria; on which he worked between 1697 and 1700. A gifted draughtsman, Maes produced numerous drawings, both as preparatory studies for paintings and as finished, independent works. Arguably the most significant example of the latter group are a series of 83 elaborate pen and wash drawings illustrating various episodes from Ovid’s Metamorphoses. Perhaps intended as book illustrations or designs for prints, these refined drawings were, however, never reproduced or published in his lifetime. In 1717 the artist’s widow sold all the drawings to the art dealer Jacob de Wit, and they were eventually used as illustrations for a 1732 translation of the Metamorphoses into French. The original drawings by Maes remained together until 1762, when they were dispersed at auction in Amsterdam. Drawings by Maes are today in the collections of the Rijksmuseum in Amsterdam, the Musea Brugge in Bruges, the Wallraf-Richartz-Museum in Cologne, the Hessisches Landesmuseum in Darmstadt, the Hamburger Kunsthalle in Hamburg, the British Museum in London, the Yale University Art Gallery in New Haven, the University Library in Leiden, the Metropolitan Museum of Art in New York, the Louvre and the Fondation Custodia in Paris, the Museum Boijmans-van Beuningen in Rotterdam, the Eesti Kunstimuuseum in Tallinn, the Biblioteca Reale in Turin, the Albertina in Vienna, and elsewhere.