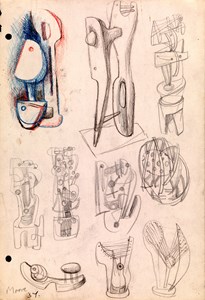 Drawing was at the centre of Henry Moore’s artistic practice. Over the course of his long career, he made over 7,000 drawings, many of these as part of sketchbooks (though the artist preferred the term ‘notebooks’). Moore’s myriad drawings – studies from life, copies after the work of earlier artists, studies of objects from nature and, most significantly, studies and ideas for sculptures - seem to have always been regarded by the artist, as well as by contemporary scholars and artists, as significant works of art in their own right. They were included in exhibitions of his work from the very start of his career, when several drawings from his first solo exhibition in 1928 were acquired by, among others, Kenneth Clark (who was to become one of Moore’s most fervent supporters) and the artists Jacob Epstein, Henry Lamb and Augustus John. Indeed, a number of gallery and museum exhibitions have been devoted solely to Moore’s drawings, the first being held at the Zwemmer Gallery in London in 1935. As further evidence of his desire to have his drawings regarded as autonomous works of art, Moore often disbound his sketchbooks and sold the individual drawings to collectors. During the early years of the Second World War, Moore was not actively involved in making sculpture, and instead poured much of his energy into drawing. The most significant of these works, and certainly the best known, were the so-called shelter drawings, made in London during the Blitz in 1940 and early 1941. Depicting people taking refuge in London Undergound stations during the nightly bombing of London, and mostly drawn from memory, the shelter drawings were exhibited at the National Gallery in London in 1941. Moore returned to sculpture in 1943, and continued to generate most of his ideas through the practice of drawing. As Andrew Causey has noted, ‘He did not use drawing to resolve parts of sculptures he planned to make: his drawings for sculptures are always of finished objects, and he rarely seems to have worked on sculptures with drawings around him, as if, once he had decided on the result he was looking for, drawing was no longer useful. To that extent drawing and sculpture were separate practices: one began where the other ended.’ In the 1950s, however, Moore’s growing international success, and the increasing number of commissions he received, led to a considerable decline in the amount of drawings he produced. He began to concentrate on sculpture, using drawings mainly to work out ideas for specific works, rather than as a means of experimentation. He also began to develop designs for sculpture in the form of clay or plaster maquettes.