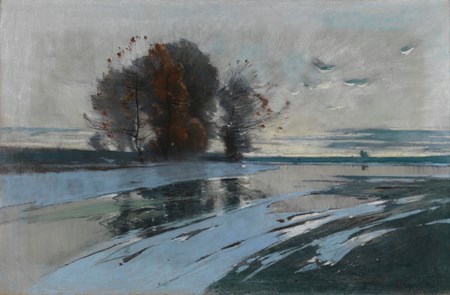 Karl Hagemeister studied under the landscape painter Friedrich Preller at the Kunstschule in Weimar from 1871 onwards, but in 1873 met the Austrian painter Carl Schuch at the Hintersee in Bavaria, and soon became his pupil. Through Schuch, Hagemeister was introduced to the circle of artists around Wilhelm Liebl. With Schuch and Wilhelm Trübner, he travelled to the Low Countries in 1873-1874, and also spent some time in Italy between 1875 and 1876. From 1876 Hagemeister lived and worked in Ferch on the Schwielowsee. Accompanied by Schuch, he visited Paris in 1884, where he came into contact with the work of the Barbizon and Impressionist artists. As a result, his landscapes became less naturalistic and more overtly pictorial, with a looser technique, cooler tonalities and a more summary treatment of forms. As has been noted of the artist, ‘Absorbing the influence of Japanese art through the interpretations of the French Impressionists, and following trends in international Art Nouveau, Hagemeister developed an individual variant of Jugendstil. His pictures were composed in accordance with decorative rather than naturalistic principles, and became primarily ornamental.’From 1890 onwards Hagemeister lived in relative isolation in his native town of Werder, on the Havel river west of Potsdam. There he painted mainly oil and pastel landscapes of local views, as well as marine and coastal subjects, that reflect the influence of the Impressionists in their atmospheric treatment of light, shade and reflection. He was fond of certain motifs – trees, rocks, meadows and the banks of rivers or lakes – and to achieve the effects he wanted he often applied the paint or pastel on his canvases with his fingers rather than with a brush. Hagemeister exhibited widely and earned several honours, and in 1898 was a founding member of the Berlin Secession, along with Max Liebermann. In 1912 a large retrospective exhibition of his work, numbering almost ninety paintings, pastels and drawings, was held in Munich, Berlin and Hamburg, which helped to confirm his reputation as one of the finest landscape painters of his day. In 1916, however, he fell ill and largely gave up painting, although he was nominated a member of the Akademie der Künste in Berlin in 1923. A large and comprehensive collection of paintings and drawings by Hagemeister is today in the Bröhan-Museum in Berlin, while a significant group of landscape sketches in pencil and pen by the artist is in the collection of the Kupferstichkabinett in Berlin.