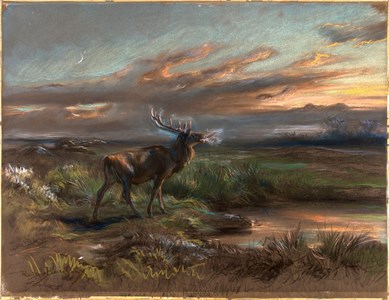 Marie-Rosalie (always known as Rosa) Bonheur was the eldest child of the minor painter Raymond Bonheur, with whom she received her initial training. (Her three younger siblings, Auguste, Juliette and Isidore, were also to become artists.) Developing a particular penchant for animals, landscapes and pastoral subjects, she exhibited for the first time at the Salon of 1841, eventually winning a third-class medal in 1845 and a gold medal four years later. A commission from the State resulted in a large painting of Oxen Ploughing in the Nivernais, exhibited to considerable acclaim in 1849 and today in the Musée d’Orsay. In 1851 she began work on another huge canvas, The Horse Fair, which was completed in 1853 and exhibited at the Salon that year. The painting was eventually purchased for 40,000 francs by the Victorian art dealer and entrepreneur Ernest Gambart, and initiated a long and successful commercial relationship with the artist. At the Salon of 1855 a painting of Haymaking in the Auvergne, commissioned by the Duc de Morny, was awarded another gold medal. This was to be Bonheur’s last contribution to the Salons for several years, however. In 1856, at the instigation of Gambart, she visited England and Scotland, meeting Queen Victoria and several prominent figures in the English art world, including Edwin Landseer – her British counterpart as an animal painter, and equally successful - and John Ruskin. In the succeeding years she began to retreat from the Paris art world, eventually establishing her home and studio in the Château de By in Thomery, at the edge of the forest of Fontainebleau. She continued to receive numerous honours including, in 1865, membership in the Légion d’Honneur; the first woman artist to be admitted. She again exhibited her work in Paris, after an absence of more than a decade, at the Salon of the Exposition Universelle in 1867. One of the most famous and honoured artists of the day, Rosa Bonheur continued to work with much success, enjoying a lucrative market for her animal paintings in France, England and America, until her death at the Château de By in 1899.