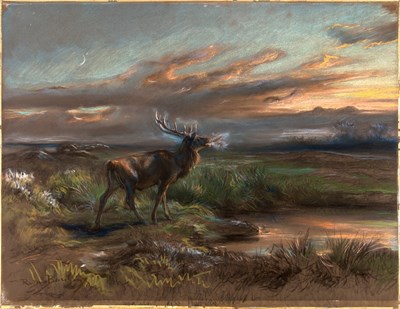 The Call of the Stag Sold


This large pastel is datable to the decade of the 1890s, when Rosa Bonheur turned more towards the medium of pastel in order to achieve intense, luminous effects in her landscapes. The setting is the edge of the forest of Fontainebleau, which was once home to numerous stags, roes and roebucks, as well as wild boar, rabbits and pheasants. (A very similar landscape setting at Fontainebleau is seen in a large lithograph by Bonheur, signed and dated 1865, depicting a stag and several deer in identical terrain.) As an early account of the artist noted, ‘Another change in the Fontainebleau forest also caused deep regret in the heart of Rosa Bonheur. I refer to the drying up of the ponds, which seems to be in course all over the region. She thought this waning symbolised the gradual decline of her own life. This disappearance of the water in the neighbourhood of the Gorge aux Loups removed still another attraction from that spot. In those earlier days, the Mare aux Fées, now scarcely more than a marshy hollow, contained shallow but limpid water, while its banks and the plateau roundabout were covered by a short, thick turf, in the midst of which rose up those healthy isolated oaks. At night the moon would light up the whole scene most beautifully, and then it was that Rosa Bonheur, hidden behind a tree or shrub, would lie for hours together, watching the stags who would come there from miles around in order to quench their thirst, and who, in the autumn, when in heat, would lock antlers and fight sturdily on the banks. Many were the studies of combating stags that Rosa Bonheur bore away in her mind from the Mare aux Fées, and transferred to canvas early next morning in her studio.’

Among thematically and stylistically comparable works by Rosa Bonheur is a very large pastel on canvas of A Stag and Three Doe in a Misty Mountainous Landscape, signed and dated 1897, which appeared at auction in 1985, and The King of the Forest, also dated 1897, which was sold at auction in 2007. Two similarly sizeable pastels of A Stag in the Mist and Stag and Deer, Morning Effect were both exhibited at the Galerie Georges Petit in Paris in 1897; the latter work reappeared at auction in New York in 2001.

The present sheet belonged to the Swiss lawyer and politician Adolf Streuli (1868-1953).

Annie-Paule Quinsac has confirmed the attribution of this pastel to Rosa Bonheur.

Provenance:
Arthur Tooth and Sons Ltd., London
Acquired from them in April 1932 by Adolf Streuli, Zurich
Thence by descent until 2018.

The Call of the Stag