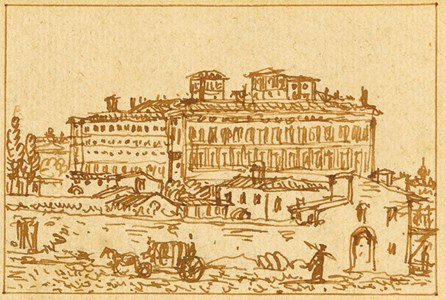 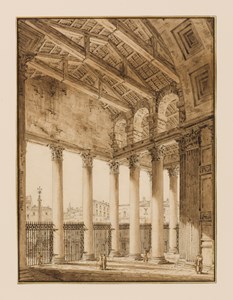 Like many French artists of his day, Victor-Jean Nicolle was captivated by the sights and buildings of Rome, although he surpassed most of his contemporaries in devoting much of his long career to watercolour views of the Eternal City. His initial artistic training in Paris was as a student at the Ecole Royale Gratuite de Dessin, where in 1771 he won the grand prix de perspective, and he later entered the studio of the architect Louis Charles Petit-Radel. He never became a member of the Académie Royale in Paris, however. Judging by the dates on some of his drawings, Nicolle spent long periods in Italy between 1787 and 1798, and again between 1806 and 1811. His charming, picturesque drawings of Rome, while full of anecdotal detail, were also topographically accurate. They are, as such, important historical records of the appearance of the city in the late 18th and early 19th centuries. Inspired by the example of Hubert Robert, Nicolle also produced a number of architectural capriccios. Nicolle would generally make drawings 'sur le motif' in pen and ink, which he would then finish with watercolour in his studio. Although best known for his Roman views, he also produced drawings of other cities in Italy, including Bologna, Venice, Verona, Naples and Florence, while in France he made numerous studies of Paris and its environs. (Only a handful of paintings by the artist are known.) Although he never exhibited at the Salons, his reputation as a topographical artist was such that in 1810 he received a commission from Napoleon for fifty watercolour views of the principal monuments of Paris, intended as a wedding present for the Empress Marie-Louise and now at Malmaison. Other significant groups of drawings by Nicolle are today in the Louvre, the Musée Carnavalet and the Bibliothèque Nationale in Paris, as well as the museums of Rouen and Lille.