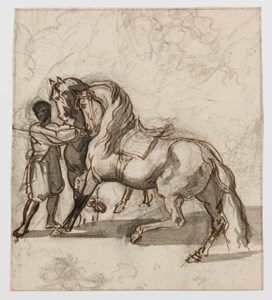 When Théodore Gericault died in January 1824, at the age of thirty-three, he was best known as the painter of The Raft of the Medusa, which had caused a sensation when it was exhibited at the Salon of 1819. The public at large knew little or nothing of his work as a draughtsman, however, so when the contents of his studio – containing some 220 paintings and several hundred drawings and sketchbooks - were sold at auction in November 1824, the works on paper were a revelation, and were eagerly acquired by collectors. Several important collections of drawings and watercolours by Gericault were formed in France in the 19th century – by Alfred Armand, Louis Bro, Philippe de Chennevières, Alexandre Colin, L. J. A. Coutan, Horace His de la Salle and François Marcille, among others - and works by the artist have remained popular with collectors and connoisseurs ever since.