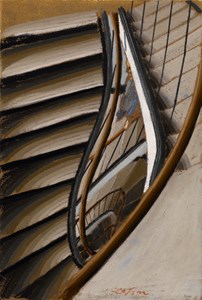 Born Samuel Berger in Paris in 1934 to Polish immigrants, Sam Szafran took the maiden name of his mother when he began to sign his works in the 1960s. Although he was briefly enrolled at the Académie de la Grande-Chaumière in Paris in the mid 1950’s, he was largely self-taught as an artist. He exhibited at the Salon des Indépendants in 1957 and two years later at the Salon des Réalités Nouvelles. While his earliest work was based in abstraction, from around 1960 onwards he began to depict representational subjects, drawn in dry pastels, charcoal or watercolour. Content with studying a limited range of subjects - notably studio interiors, staircases and plant forms - Szafran produced numerous drawings, each characterized by a very skillful handling of the medium and an abiding interest in perspectival effects. From 1965 onwards Szafran's work was exhibited extensively in France, and also in Switzerland, but only rarely elsewhere. Szafran contributed to the Nouvelle Subjectivité exhibitions curated by Jean Clair in Paris in 1976 and Brussels in 1979. His work continues to be exhibited widely, and works by Szafran are today in the collections of the Museum of Modern Art in New York, the Hirshhorn Museum in Washington, D.C., the Centre National d’Art Contemporain and the Musée d’Art Moderne in Paris, and elsewhere. A retrospective exhibition of his work was recently held at the Fondation Pierre Gianadda in Martigny, Switzerland.