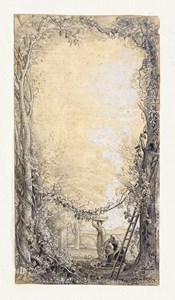 The son of a bookseller, Samuel Palmer lost his mother at an early age and was raised by a nurse, who introduced him to poetry and, in particular, the works of John Milton, for whom he was to have a lifelong passion. His only artistic training came in the drawing lessons he took as a youth, and it is due largely to a number of early encounters with other artists that his style developed. In 1822 he met John Linnell and, through him, was introduced to William Blake two years later. Both artists were to be formative influences on the young Palmer, with Blake, in particular, becoming a mentor and lifelong inspiration. Palmer’s devotion to landscape is evident from his earliest works, and by the second half of the 1820s he had begun to produce richly worked scenes of the countryside around Dulwich in London, treated as a kind of mysterious, fruitful and dreamlike garden. This ‘visionary’ approach to the pastoral English landscape found its fullest expression when Palmer was living in the village of Shoreham in Kent, where he settled in 1826. The highly finished paintings and drawings of the Shoreham period, in the late 1820s and early 1830s, are regarded as the peak of Palmer’s early career. Painted and drawn in a rich combination of media, and characterized by an intensity of imagery and sentiment, his Shoreham works went against much of what was conventional in the landscape art of the day. (As David Blayney Brown has noted, ‘The inspired fantasy of Palmer’s Shoreham landscapes is unique in English art and can be matched only in the work of continental Romantics like Caspar David Friedrich and Philipp Otto Runge.’ At Shoreham, Palmer was associated with a small group of like-minded artists, including George Richmond and Edward Calvert, who called themselves ‘The Ancients’, but none were quite so committed to this radical vision of landscape as he was. This resolutely single-minded and somewhat uncommercial approach could not last, however, and Palmer’s style began to change in the mid 1830s. He moved back to London and began travelling further afield, to Devon, Somerset and North Wales, in search of landscapes to paint. Following his marriage to Linnell’s daughter Hannah in 1837, and a two year honeymoon in Italy, Palmer’s work became distinguished by a brightness and clarity inspired by the light of the Mediterranean. The finished Italianate landscapes that he produced over the next three decades, executed in a rich technique of watercolour, gouache and gum arabic, are among his most attractive and appealing works. In 1843 Palmer was elected an Associate of the Old Water-Colour Society, becoming a full member in 1854, and although he exhibited there annually, he found few patrons and had to work as a drawing-master to supplement his income. In 1865, however, he received his most important commission, for a series of very large watercolours illustrating Milton’s poems L’Allegro and Il Penseroso, from the solicitor Leonard Rowe Valpy. Palmer worked on these impressive watercolours over the next sixteen years until his death, and they account for some of his finest late work. He also produced a series of largely monochrome drawings, in pencil, charcoal, chalk, watercolour and ink, which were intended to illustrate his own translation of Virgil’s Eclogues. His skill as a draughtsman never faltered and was much admired into his old age; indeed ‘by the end of his life he was as effective – if less widely acknowledged – a master of bravura watercolour as any of his exhibiting contemporaries.’