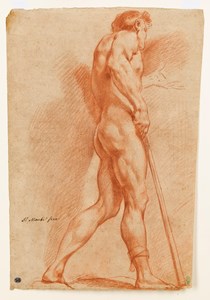 Following a period of study in Modena with Sigismondo Caula, Francesco Monti returned in 1693 to his native Bologna, where he completed his training in the studio of Giovan Gioseffo Dal Sole. The Venetian qualities inherited from Caula remained evident in his work throughout his long and successful career. Among his important early works is the large Pentecost for the church of San Prospero in Reggio Emilia, dated 1713. His career flourished in the 1720’s, when he received a number of significant commissions for history paintings and was elected to a term as principe of the Accademia Clementina.Together with such artists as Donato Creti, Sebastiano and Marco Ricci, Giambattista Pittoni, Canaletto, Giovanni Battista Piazzetta and others, Monti contributed to a series of large allegorical paintings of imaginary tombs commemorating prominent British noblemen, commissioned by the Irish entrepeneur Owen McSwiny in the late 1720’s and 1730’s from teams of the foremost Venetian and Bolognese painters of the day. Monti also executed several paintings for churches in Bologna and the surrounding region, among them a Death of Saint Peter Martyr for San Domenico in Modena, completed in 1732. Four years later he moved to Brescia to work on the decorations, now lost, of the Palazzo Martinengo. The success of this project led to further commissions, and Monti eventually established a flourishing practice in Brescia. The later years of his career were spent working mainly in Lombardy – mainly in Brescia, Cremona and Bergamo – on a number of large-scale fresco commissions. Among his most significant late works is the extensive decoration of the church of Santa Maria della Pace in Brescia.Monti is perhaps better known today as a draughtsman than as a painter. As has been noted of the artist, ‘Monti’s drawing style is highly individualistic: it is based on the firm Bolognese academic tradition, but the treatment of the chalk medium, which he preferred, is handled with a particular deftness...His lightness of touch, combined with the “Neo-Mannerist” predilection for attenuated figures, produce a combination of elegance and spontaneity rare in the Bolognese tradition.’ Monti was a prolific and gifted draughtsman, producing both figure studies in black chalk and compositional drawings in red chalk.