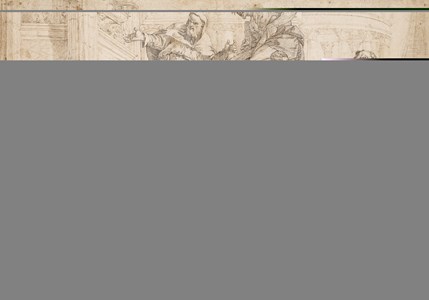 A pupil of Sebastiano Ricci, Francesco Fontebasso spent a brief period of study in Rome before returning to his native Venice, where he produced a series of engravings after Ricci’s paintings. He established his career in Venice, painting several altarpieces for local churches, and was soon in some demand as a fresco painter. In 1734 he decorated the ceiling of the church of the Gesuiti in Venice, and two years later painted a fresco cycle for the church of Santa Maria Annunziata in Trent. Fontebasso worked for members of the Venetian aristocracy such as the Barbarigo family, for whom he painted decorative fresco cycles in the Palazzo Duodo and the Palazzo Barbarigo. Apart from his success as a fresco painter, Fontebasso made a particular specialty of small-scale devotional easel pictures and modelli, and also worked as an engraver and a designer of book illustrations. From 1756 onwards he was a professor at the Accademia Veneziana, and in 1761 he visited St. Petersburg at the invitation of the Empress Catherine II. Fontebasso remained in Russia for almost two years, completing a number of decorative projects for the Winter Palace in St. Petersburg and other Imperial palaces, as well as painting portraits and genre studies. Although appointed a Professor at the Imperial Academy of Arts, he chose to return to Venice in 1762, where he rose to the position of principe of the Accademia in 1768, shortly before his death. As Filippo Pedrocco has noted, ‘Fontebasso was a prolific draughtsman and produced sparkling, delicate work in the best tradition of the Venetian Rococo.’1 Like his paintings, his drawings are best described as a synthesis of the manner of his teacher Sebastiano Ricci with the drawings of Fontebasso’s slightly older contemporary, Giambattista Tiepolo. As Pedrocco points out, ‘at different stages of his career his graphic work sometimes reflects the influence of one, sometimes the other. He was not simply a passive interpreter of their work, however, and was capable of achieving a high degree of poetry independent of their influence. Examples can be found among his many ‘finished’ drawings, evidently intended for collectors.’ Most of Fontebasso’s drawings are executed in pen and ink, and while only relatively few may be connected with his paintings, several can be related to the handful of etchings that he made.