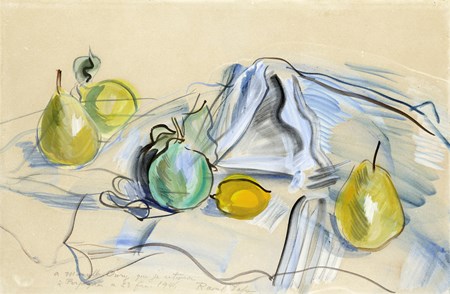 Trained in the studio of Léon Bonnat at the Ecole des Beaux-Arts in Paris, Raoul Dufy was deeply affected by his first exposure to the work of Henri Matisse and the Fauve artists at the Salon des Indépendants in 1905. He soon took up the Fauvist manner, and had his first one-man show at the Galerie Berthe Weil in 1906, though by 1908 he had abandoned Fauvism for a more deliberately naïve style. He was at this point struggling to earn an income and, like Kees van Dongen and André Lhote, would sell drawings for five francs apiece to the Paris Journal. He produced his first woodcuts between 1909 and 1910, and around 1911 began working with the couturier Paul Poiret on the design of textiles, fabrics and interior decorations. This was to be the start of a long and fruitful collaboration with Poiret, who was to become Dufy’s most important patron.The years following the First World War found Dufy continuing to work for Poiret, as well as producing book illustrations, tapestry cartoons and designing stage sets. Exhibitions of his work were held throughout the 1920’s at the Galerie Bernheim-Jeune, and the artist divided his time between Paris and the South of France. Dufy travelled to Morocco and Italy and was a regular visitor to England, where he painted the annual regattas at Cowes and Henley and the races at Epsom and Goodwood. He also painted the regattas at Le Havre and Deauville. For the Exposition Universelle of 1937 he was commissioned to paint a massive mural of La Fée Électricité, covering nearly six hundred square metres, for the Palais de la Lumière. This was followed by a series of mural decorations for the Palais de Chaillot and panels for the Jardin des Plantes. Already suffering from the severe arthritis that in later years would confine him to a wheelchair, Dufy nevertheless continued to work steadily throughout the period of the Second World War, and in the years afterwards regularly exhibited at the Salon des Tuileries. A large retrospective exhibition of his work was held in Geneva in 1952, while in the same year an exhibition of more than forty paintings at the Venice Biennale earned the artist the Grand Prix. Dufy’s oeuvre consists of around two thousand paintings and the same amount of watercolours, as well as around a thousand drawings. He provided illustrations for some fifty books, and also produced woodcuts, tapestry cartoons, ceramic pieces and fabric designs, as well as stage sets and mural decorations. He created over two thousand designs for the silk manufacturers Bianchini-Ferrer in Lyons, and his fabric work was regularly exhibited at the Salons des Artistes Décorateurs. As a draughtsman, however, Dufy has remained somewhat less appreciated, despite the originality of his vision and the popularity of his work in other media. Nevertheless, one recent scholar has justly praised Dufy’s ‘exceptional fluency, grace and spiritual refinement as a draughtsman’, while Sir Kenneth Clark is said to have described the artist as ‘comparable only to the greatest draughtsmen in European art, to Tiepolo or to Watteau, and misconceived, under-rated by the English.’ As Dufy himself wrote in one of his notebooks, ‘My drawings are indeed drawings in themselves, but not one of them exists for itself. They are always designs for paintings...My drawings are always done from nature and they express above all the density of forms and their position in light and space. They are always created to capture the effect of light. That is why they help me paint.’