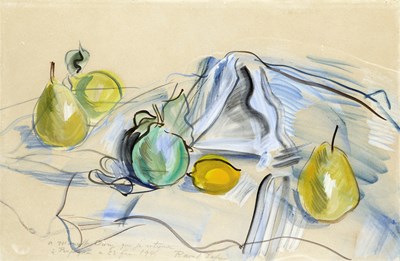 
According to the artist’s inscription at the bottom of the sheet, this still life was drawn in Perpignan on the 23rd of February 1946, and given by Dufy to Mme. Marcelle Oury (1894-1980). A journalist and sometime art critic, Marcelle Oury was a friend of the couturier Paul Poiret, through whom she met Dufy in 1911. Oury enjoyed friendships with many leading figures in the artistic and literary circles of Paris in the 1920’s and 1930’s, notably Tsuguharu Foujita, Jean Cocteau, André Derain, Kees Van Dongen and Jacques Villon. She spent the years of World War II in Vichy and Geneva, returning to Paris in October 1944. After the war, Dufy had settled in Perpignan in the French Pyrenees, where the climate was better for his health, and Marcelle Oury visited him there. As the artist wrote in a letter to Oury’s son in November 1946, ‘What a pleasure it is for me to receive your mother as my guest here. She brings a bit of Paris with her and all sorts of souvenirs that are welcome in my Roussillon retreat.’ Marcelle Oury and Dufy were to remain close friends until the artist’s death in 1953, and in 1965 she published a book on the artist, entitled Lettre à mon peintre, Raoul Dufy. Oury acquired several works from Dufy as gifts, which decorated her apartment on the rue de Coucelles in Paris. (In later years, as her son recalled, ‘I know that four, five times a night, she would get up, contemplate her Dufys and, her eyes full of purple regattas, of fields of wheat, of racetracks where elegant people paraded...Mother would fall asleep again, her mind full of vivid images.’) This watercolour appears in the background of a photograph of Marcelle Oury with the cellist Mstislav Rostropovich, taken around 1976. After Marcelle Oury’s death in 1980, the present sheet later passed to her son, the celebrated French actor, screenwriter and filmmaker Gérard Oury (1919-2006), who continued to add to the collection, eventually assembling a significant group of works by Raoul Dufy.An earlier variant of this composition, with the addition of a coffee pot, appears in a watercolour dedicated by the artist to the French novelist and performer Colette.Gérard Oury has left an interesting account of visits he made with his mother to Dufy’s studio, on the Impasse de Guelma in Paris: ‘Paintings leaning against the walls, stacked against each other, portfolios swollen like the stomach of a pregnant woman, stuffed with watercolours...Raoul Dufy ruthlessly tore and erased watercolours and paintings. Rarely satisfied, he steps back and judges his work: “Not bad!...” The ultimate compliment. And if someone enthuses: ‘But you only took ten minutes to do it!”; he would reply, “No, monsieur, fifty years!”’

Still Life with Pears and Lemons