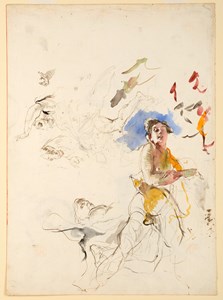 A native of Monza, Mosé Bianchi received his artistic training at the Accademia di Brera in Milan. Even in his earliest works - academic history subjects and altarpieces - the lightness of touch and fluidity of handling for which he would be known is readily evident. In 1866 he went to Venice, where he was strongly affected by the work of Giambattista Tiepolo. The following year he was in Paris, where he met the art dealer Goupil, who did much to spread the artist’s reputation outside Italy. In 1877 Bianchi completed his first significant decorative project, the fresco decoration of the Villa Giovanelli at Lonigo, near Vicenza. A family of bankers and merchants, the Giovanelli were well known as collectors and connoisseurs, and their employment of Bianchi enhanced the artist’s reputation and led to further fresco commissions. Much of the effect of these ceiling frescoes, painted in three rooms of the villa, has today been lost as a result of poor restoration and conservation. It is only through the surviving preparatory studies and oil sketches for these frescoes that some sense of their Tiepolesque freschezza can be appreciated. Bianchi continued to develop his distinctive, painterly style in his views of Venice of the 1880’s and of Milan in the following decade. His oeuvre also includes many scenes of rural life, notably around Gignese on Lake Maggiore, and several superb portraits.