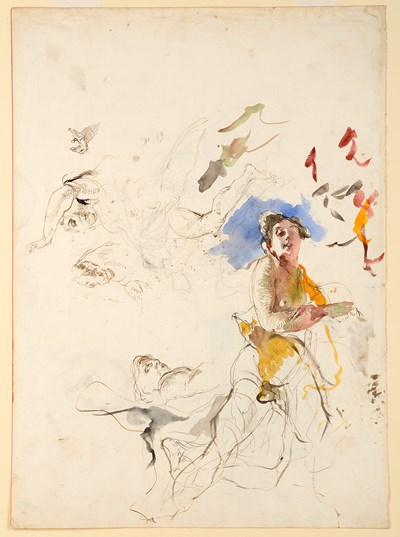 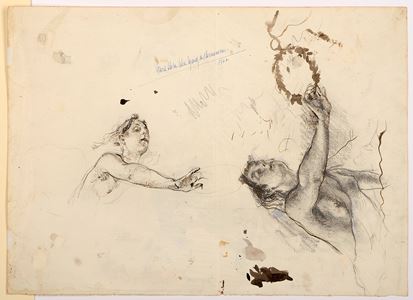 
Both sides of this large drawing are related to the decoration of the Villa Giovanelli in Lonigo, where Mosè Bianchi was commissioned in 1877 to paint a series of frescoes for the ground floor rooms. A family of bankers and merchants, the Giovanelli were well known as collectors and connoisseurs, and their employment of Bianchi served to enhance the artist’s reputation, and led to further fresco commissions. Much of the effect of these ceiling frescoes, painted with a mastery of foreshortening and perspective in three rooms of the villa, has today been lost as a result of poor restoration and conservation. Bianchi produced several preparatory studies for the Villa Giovanelli frescoes, in the form of oil sketches, drawings, watercolours and even plaster models, and it is only through the surviving studies for the frescoes that a sense of their Tiepolesque 'freschezza' can be appreciated.

The verso of the present sheet contains two studies for an allegorical female figure holding a laurel wreath in Bianchi’s fresco of Glory and History in the sala degli arazzi of the Villa Giovanelli, for which a large preparatory painting is in the Museo Godi Valmarana in Lugo Vicentino. A chalk study for the entire figure, also from the Bernasconi collection, was on the art market in New York in 1987.

This double-sided sheet was once part of a large group of paintings and drawings by Mosè Bianchi purchased from the artist by the brothers Juan (d.1920) and Felix Bernasconi (d.1914). The Bernasconi brothers were prominent Milanese industrialists who formed an impressive collection of works by contemporary Italian painters of the late 19th and early 20th centuries.