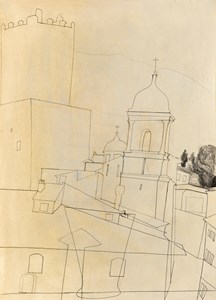 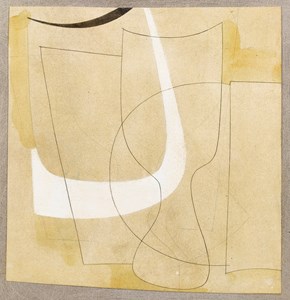 The son of the painters William Nicholson and Mabel Pryde, Ben Nicholson spent a brief period at the Slade School of Art in London but was otherwise without formal artistic training. It was not until 1920 and his marriage to the painter Winifred Dacre that he began to paint seriously, producing mainly still life and landscape paintings throughout the following decade. In 1932 he and his second wife, Barbara Hepworth, traveled to France and there met and befriended Pablo Picasso, Georges Braque, Constantin Brancusi and Jean Arp, and later Piet Mondrian. It was also at this time, in the 1930’s, that Nicholson began to work in a more Cubist manner, creating paintings and reliefs made up of abstract geometrical forms, and in particular producing a series of carved and painted white reliefs that have become icons of 20th century English modernism. At the outbreak of the Second World War, Nicholson and Hepworth and their children moved to the town of St. Ives in Cornwall, where they became the nucleus of a vibrant artistic community. Nicholson’s reputation grew significantly after the war, and he won several artistic prizes in America and elsewhere. In 1954 a retrospective exhibition of his work was held in the British pavilion at the Venice Biennale, followed a year later by one at the Tate. In 1958 he left St. Ives and settled in Switzerland, having annulled his marriage to Hepworth in 1951 and remarried. A second Tate retrospective in 1968 was accompanied by the awarding of the Order of Merit.Drawing was an important part of Nicholson’s artistic process throughout his career. His drawings were, however, not made as studies for carved reliefs or paintings, and it should be noted that ‘more than simply preparatory or exploratory tools, drawings were to him full-blown works of art…His drawings are characterized by a strong continuous line, which sinuously defines form and space without a break. Shading is used sparingly and any illusion of volumetric mass simply suggested by the interweaving lines.’