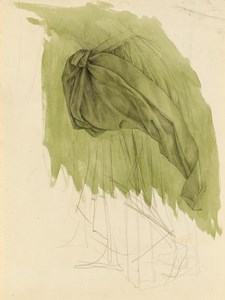 Anne Newland studied under Ernest Jackson at the Byam Shaw School of Art in London, between 1936 and 1938, and won an Abbey Scholarship to study at the British School in Rome in 1938. (As her teacher Ernest Jackson wrote in support of her scholarship application, ‘I think Miss Newland to be an extremely talented artist. There is no  doubt in my mind as to her suitability for the scholarship. She is a  natural decorator and has always since her advent to the Byam Shaw  School worked in the direction of decoration. Personally she is very  reserved but mixes well with other students in all their social  activities. She is a most industrious worker.’) The following year she was awarded a full Rome scholarship, which allowed her a further two years in Rome. Newland was particularly influenced by the work of Italian Renaissance artists, especially Andrea Mantegna. Her chief work while in Rome was a cartoon for a large mural of The Legend of Ceres. Intended as the central panel of a triptych, the painting was, however, never brought to fruition when the outbreak of the Second World War interrupted her studies in Italy. She lived in London, and exhibited at the Royal Academy and the Royal Scottish Academy. Newland won a handful of artistic competitions for public commissions, notably one held by the Royal Society of Arts in 1949 for a mural to decorate the entrance hall of a new factory for the National Cash Register Company in Dundee, Scotland. Newland’s winning proposal was for a painting of The Legend of Saint Regulus Taking the Bones of Saint Andrew from Constantinople to the Shores of Scotland.