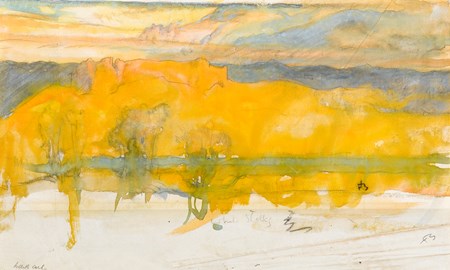 Frank Brangwyn’s use of watercolour was to last his entire career; his earliest known work in the medium dates from 1878, when he was just eleven years old, while the latest is dated 1955, the year before his death. His numerous watercolours were mainly devoted to landscapes and townscapes, and were generally more subdued in tonality than his oil paintings and murals, and are less dominated by figures. Brangwyn made sketching trips to Italy (especially Venice), France, Belgium and Spain; the last in the company of Arthur Melville, whose watercolour style was to influence his own. Many of his watercolours are actually works of mixed media, enlivened with the addition of touches of gouache, tempera, pencil, chalk, pastel or pen and ink, and are often very large in scale. Brangwyn only rarely exhibited his watercolours, which seem to have been done, for the most part, purely for his own pleasure. In a brief review of an exhibition of Brangwyn’s watercolours in 1934, a critic noted of him that ‘He is English, perhaps in the skill with which he handles water-colours, but he is far from being readily related to the so-called English Tradition. He is not as realistic as Constable, nor as romantic as Turner, nor as “flat” as Cotman, nor as atmospheric as Cox, nor as architectural as Roberts, nor as delicate as Steer. He is one thing that none of these water-colourists ever were: primarily decorative…every water-colour here strikes the spectator at a distance.’ Another scholar has noted of Brangwyn that ‘The variety and excellence of his water-colours gives them the right to be considered entirely upon their own high merits, as great works of art carried out in a medium which is more difficult, more exacting, more spontaneous and more revealing than any other.’