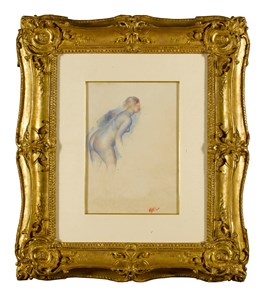 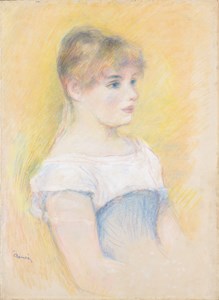 Auguste Renoir was an inveterate draughtsman, equally adept in pencil, pen, chalk, charcoal, watercolour and pastel. Yet he seems to have thought little of his drawings, throwing away or destroying most of them, and is said to have even used drawings to light the kitchen stove. Apart from pastels, Renoir only rarely exhibited his drawings in his lifetime, and it was not until two years after his death that a significant exhibition of his drawings was held, at the Galerie Durand-Ruel in 1921. The exhibition comprised a large number of drawings, watercolours and pastels from all periods of the artist’s career, numbering almost 150 works. For many visitors, the exhibition was a revelation; as one critic wrote, ‘We make our way into the artist’s studio, he opens his portfolios for us, hides nothing from us, from the most accomplished works to the faintest of notes.’ For much of the last two decades of his life Renoir’s hands were crippled by arthritis, so that by around 1913 his hands were so bent that he was no longer able to draw. Yet it remains true of Renoir that, as François Daulte wrote, ‘It is in his sketches and studies, rather than his large paintings, that he reveals all his originality and freshness of vision.’