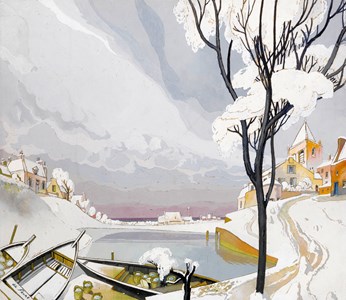 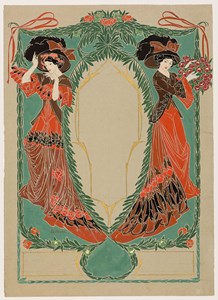 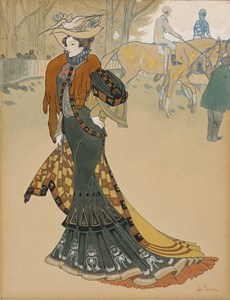 Of Belgian and Dutch origins, Georges de Feure was largely self-taught as an artist. He was born Georges Joseph van Sluijters in Paris, where his father worked as an architect. Returning with his family to the Netherlands with the outbreak of the Franco-Prussian war in 1870, De Feure did not come back to Paris until 1889. Settling in Montmartre, he may have trained with Jules Chéret and began working as an artist and illustrator. De Feure soon allied himself with the Symbolist movement, taking part in the Exposition des Peintres Impressionistes et Symbolistes at the Galerie Le Barc de Boutteville, alongside Gauguin and the Nabis artists, as well as showing his work at the Salons de la Rose + Croix of 1893 and 1894, where his watercolours garnered some critical praise. De Feure exhibited at the Societé Nationale in 1894, and the same year an exhibition of his watercolours was held at the Galerie des Artistes modernes in Paris, leading one critic to describe him as ‘an artist whose work is never banal, but whose symbolism is not always accessible.’ By this time De Feure was also designing posters, many seemingly influenced by Japanese prints, as well as producing colour lithographs.Like such contemporaries as Alphonse Mucha and Eugène Grasset, Georges de Feure was equally adept in the field of applied or decorative arts. Aptly described by one modern scholar as ‘the most art nouveau of all the Symbolists’, De Feure embarked on an association with the Art Nouveau pioneer Siegfried Bing that was to establish his reputation. He decorated the facade and designed two suites of furniture for Bing’s Pavillon de l’Art Nouveau at the great Exposition Universelle of 1900, a project that earned extravagant praise from critics, and thereafter worked closely with Bing as an artiste-décorateur, providing numerous designs for furniture, stained glass, wallpaper, ceramics and lamps. In 1903 a large exhibition of his decorative work for Bing’s Galerie de l’Art Nouveau was held in Paris, later travelling to The Hague and Hamburg. De Feure also established his own atelier, which handled commissions from other sources, such as Julius Meier-Graefe’s gallery La Maison Moderne. He continued to work as a designer and interior decorator after Bing’s death in 1905, and also undertook a number of commissions for scenery and costume designs for the stage. Among his significant later projects was the decoration of the Parisian studio of the couturier Madeleine Vionnet in 1922, and interiors and pavilions for various expositions. Late in his career De Feure was appointed Professor of Decorative Art at the École des Beaux-Arts in Paris.