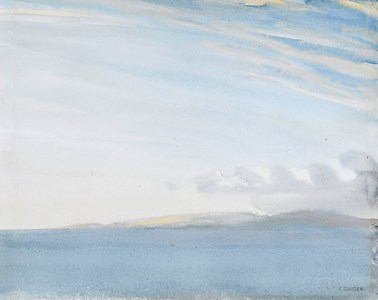 George Clausen worked from age of sixteen as a draughtsman in a firm of decorators in London before winning a scholarship to the South Kensington Schools. A significant influence on the young artist was Jules Bastien-Lepage, whose work he first saw at the Grosvenor Gallery in London, and who inspired him to take up the theme of rural life as his subject matter. Working directly from nature, he painted scenes of rural life, and in particular the landscape and peasants of the farmlands of Essex. As one scholar has written, ‘His preoccupation was with light; the dazzle of sun on cornfields and haystacks and mowers at midday, the stilled radiance of blossom in orchards, the woods and empty fields at evening, and the subtle atmospheric effects in shadowy barn and stable.’ In 1886 Clausen exhibited at the New English Art Club, and by 1891 was showing at the Royal Academy, although he did not have a one-man gallery exhibition until 1902. By the 1890’s the influence of Bastien-Lepage had been tempered by that of Claude Monet and Edgar Degas, artists whom Clausen greatly admired. He was appointed a Professor of Painting at the Royal Academy Schools, and was elected an A.R.A. in 1895. He joined the Royal Watercolour Society in 1898, and became a Royal Academician in 1908. In 1926 he received a commission for a large mural for St. Stephen’s Hall in the House of Commons, and on its unveiling the following year received a knighthood. Clausen continued to enjoy a successful career until his death in 1944, at the age of ninety-two. A retrospective exhibition of his work at the National Gallery, proposed just a few months before the artist’s death, sadly never took place.As a draughtsman, Clausen was a gifted and prolific master of different media, and some forty sketchbooks from throughout his long career survive. His drawings were often preparatory studies for his pictures, although their significance as works of art in their own right can be seen in the fact that, at his first one-man exhibition at the Goupil Gallery in London in 1902, he actually exhibited more drawings and pastels than oil paintings, with thirty-one of the former and twenty of the latter.