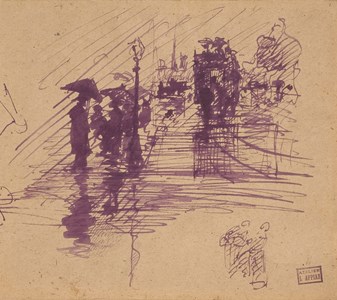 The only son and pupil of the landscape painter Adolphe Appian, Louis Appian was active as a genre, still life and landscape painter, as well as a portraitist and etcher. He entered the Ecole des Beaux-Arts in Lyon in 1879, before winning a scholarship in 1885 to study in Paris, where he completed his training with Alexandre Cabanel. Although he failed to win the Prix de Rome in 1887, Appian enjoyed a measure of success as a painter, although not on a par with the reputation enjoyed by his father, alongside whom he sometimes painted landscapes and seascapes. He first exhibited his work at the Salon in his native Lyon in 1886, showing portraits, nudes and still life subjects, and began showing at the Paris Salon two years later. Appian’s health was weak, and was already the object of concern to his parents as early as 1892. A brief trip to Algeria at the end of 1895 seems to have aggravated his poor health, and Appian died of tuberculosis in December 1896, at the age of only thirty-four, less than two years before the death of his father.