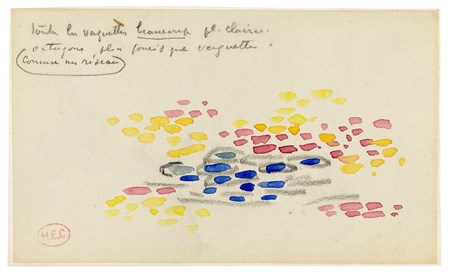 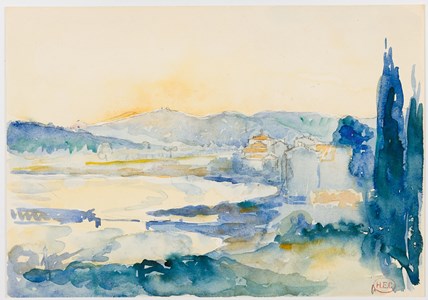 Born in Douai to an English mother and a French father, Henri Edmond Delacroix studied first in Lille and later in Paris. Early in his career he changed his surname to Cross, an Anglicized version of croix, to avoid comparisons with the famous Romantic painter and confusion with a contemporary artist named Henri Eugène Delacroix. Little is known of his work before 1884, when he first exhibited with the Société des Artistes Indépendants, of which he was a founding member. Cross did not, however, adopt the Neo-Impressionist techniques of his colleagues Georges Seurat and Paul Signac until the early 1890’s, shortly after Seurat’s death. One of his first paintings in the pointillist technique was a portrait of his future wife, exhibited at the Salon des Indépendants in 1891 and today in the Musée d’Orsay in Paris. At around the same time he left Paris for the south of France, seeking to relieve his chronic rheumatism, and eventually settled in the village of Saint-Clair, near Le Lavandou in the Var region. The Mediterranean landscape of the Côte d’Azur was to become his preferred subject matter for the remainder of his career, although he also painted idyllic scenes of bathers and mythological figures. From 1892 onwards Cross took part in all the exhibitions devoted to the Neo-Impressionist movement. His style became less rigid as his career progressed, however, with his paintings gradually adopting a greater freedom of brushwork than the more rigidly pointillist scenes of his close friend Signac. He also developed a brighter palette; the colours of his paintings reflecting his fascination with the light of the South. As Maurice Denis, a friend of the artist, noted in 1907, ‘Cross has resolved to represent the sun, not by bleaching his colours, but by exalting them, and by the boldness of his colour contrasts...The sun is not for him a phenomenon which makes everything white, but is a source of harmony which hots up nature’s colours, authorizes the most heightened colour-scale, and provides the subject for all sorts of colour fantasies.’ His friend and fellow Neo-Impressionist Paul Signac, who assembled a large personal collection of Cross’s paintings and watercolours, wrote of him that ‘One…feels in him the joy of panting, the love for delicate harmonies, something undefinably hesitant and mysterious and unexpected.’ Cross’s work may be said to have influenced such Fauve artists as Henri Matisse, André Derain, Louis Valtat and Henri Manguin, among others, who visited his studio in the Midi in the 1890’s and early 1900’s. Towards the end of his career, Cross had largely stopped painting out of doors, preferring to make small watercolours from nature which were then developed into finished paintings in the studio. He was, however, never very productive as a painter, largely due to a combination of failing eyesight and severe arthritis, and from 1900 onwards painted relatively little. Cross’s first one-man exhibition of paintings and watercolours was held at the Galerie Druet in Paris in 1905, followed two years later by a retrospective exhibition at the Galerie Bernheim-Jeune, organized by his friend Felix Féneon, which included thirty-eight paintings and fifty-one watercolours. As one scholar has written of Cross, ‘By the time of his death, his work stood as a hymn to color and sunlight, and helped form the vision of the Mediterranean coast which is commonplace today.’