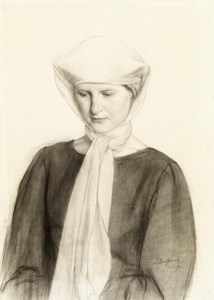 Born in the Belgian province of Hainault, Louis Buisseret studied at the Académie in Mons with Emile Motte and Louis Joseph Greuse, before completing his artistic training at the Académie Royale des Beaux-Arts in Brussels in the studio of the Belgian Symbolist painter Jean Delville. He was awarded the second prize in the Belgian Prix de Rome painting competition of 1910, and the following year won the first prize in the category of printmaking. Buisseret’s time in Rome was of particular importance to his development, and the influence of Italian Renaissance painting, particularly the frescoes the artist saw in Florence and Rome, was to be reflected in his art for much of his later career. During the years of the First World War Buisseret painted mainly portraits. In 1928 he was one of the founding members of the Nervia group of artists, and the following year was appointed director of the Académie Royale des Beaux-Arts in Mons, an institution that he continued to lead until 1949. Active mainly as a painter of portraits, nudes and still life subjects, Buisseret received several honours and prizes during his long career before his death in 1956, at the age of sixty-eight. Works by him are in numerous museums in Belgium, as well as in Barcelona, Madrid, Riga and Indianapolis; the last of these houses a group portrait of the artist’s family.