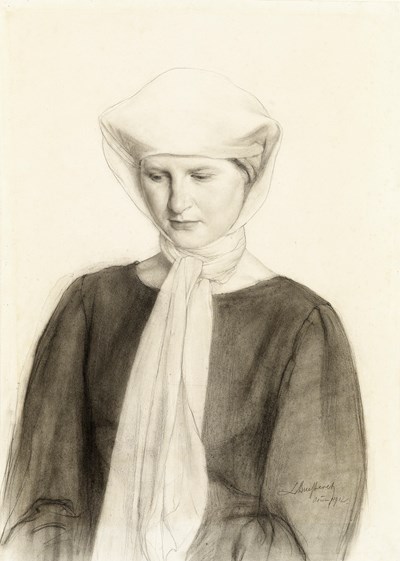 
Louis Buisseret was greatly admired as a draughtsman. As his biographer wrote, ‘Much could be written about the perfection of the draughtsmanship of this master who never ceases to remember the lessons of the great Italians and those who, in our time, succeeded them.’ Similarly, the contemporary Belgian painter Jean Ransy noted of Buisseret that, ‘Drawing was for the painter from Hainault always the principal act, a generator of style and the touchstone of his intellectual probity...All of his paintings are thought out at length, with the love of a métier that he knew better than most of his contemporaries.’Dated August 1912, the present sheet is an early work by the artist, executed the year after he won the Belgian Prix de Rome in the field of engraving.

Study of a Pensive Young Woman