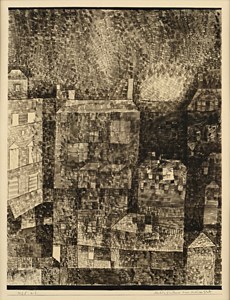 ‘Klee was a gardener in a little piece of paradise. Under his direction his charges blossomed beautifully, full of harmony and grace. His motifs seem to develop with consummate ease, almost – it would seem – of their own accord, and whatever basic note he strikes, his colours contrast in such a way that their sound blends in inevitable harmony. Even when he compresses his pictorial resources to the utmost, he never slips into anything uncontrolled or random. Klee formulates subtly sensitive offerings for the viewer’s eye, offerings so cautious and gentle that they readily elide consumption in this day and age. Paul Klee’s art demands undivided attention – and it is also capable of opening ones eyes to something that lies beyond the image itself.’ (Roland Doschka)A painter, draughtsman and writer, Paul Klee was born near Bern and studied in Munich under Franz von Stuck. His first independent works date from around 1903, and three years later he settled in Munich, where he met Wassily Kandinsky and became a member of the Neue Künstlervereinigung (New Artist’s Association) and the Blauer Reiter (Blue Rider) group. He had his first one-man exhibitions at Herwarth Walden’s Berlin gallery Der Sturm in March 1916 and February 1917, the success of which established his reputation. Shortly after leaving military service in 1919, Klee signed an exclusive sales contract with the Munich dealer Hans Goltz. In May and June of 1920 Goltz mounted the first substantial exhibition of Klee’s work in his Galerie Neue Kunst in Munich. This was followed in 1923 by another major exhibition of Klee’s work, numbering 270 works, at the Nationalgalerie in Berlin. Appointed to a teaching post at the Bauhaus in Weimar in 1920, Klee continued to work there with the move of the school to Dessau in 1925. An exhibition of Klee’s work at the newly opened Museum of Modern Art in New York in 1930 cemented the artist’s reputation outside Germany. In 1931 Klee resigned from the Bauhaus to take up a position as professor of painting at the Düsseldorf Akademie, a post he only held for two years before being banned from teaching - as a ‘degenerate artist’ - by the Nazis in 1933. By the end of that year he had moved to Bern in Switzerland. Although Klee produced relatively little work between 1934 and 1936, another large exhibition was mounted at the Kunsthalle in Bern in 1935. The same year he began showing signs of scleroderma, the disease that would eventually kill him five years later. Klee died in June 1940 at the age of sixty-one, three months after the closing of a final major solo exhibition, devoted to his late work of the previous five years, at the Kunsthaus in Zürich.