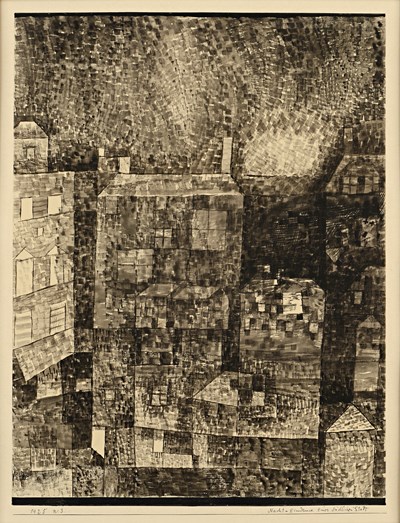 
This drawing is dated early in 1925, and must reflect Paul Klee’s memories of his trip to Sicily the previous summer. Colour is extraneous in this nocturnal view of a southern town, which depicts the anonymous village in rich detail, with an arrangement of delicately washed grisaille tones applied in small, tesserae-like blocks verging on pointillism. Although drawn in the artist’s Weimar studio rather than on the spot, the use of a mosaic-like technique in this drawing could well reflect Klee’s exposure to the rich mosaics of the churches of Palermo and nearby Monreale. The same grisaille technique is also seen in only one other major work on paper of 1925; a pen and ink wash drawing entitled 'Kind im Asterngarten' (Child in the Aster Garden), formerly in a Swiss private collection, which appeared at auction in 1990 and 1995. This drawing was exhibited by Klee’s dealer in Munich, Hans Goltz, shortly after it was drawn in 1925, at Goltz’s gallery in Munich, the Galerie Neue Kunst. The artist had signed a three-year contract with Goltz shortly after leaving military service in 1919, an arrangement which was renewed in 1922.