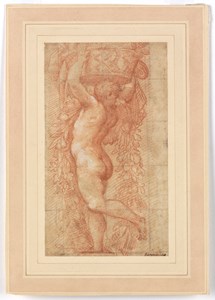 One of a Cremonese family of painters, alongside his younger brothers Antonio and Vincenzo, Giulio Campi probably received his initial artistic training with his father Galeazzo Campi. His first signed and dated painting was an altarpiece executed in 1527 for the Cremonese church of SS. Nazaro e Celso, and for the remainder of his career he worked mainly as a fresco painter in the churches of his native town. His chief works include scenes from the life of Saint Agatha in the church of Sant’Agata, completed in 1537, and a series of frescoes in the transepts of the monastic church of San Sigismondo, painted between 1539 and 1542. At San Sigismondo he worked alongside Camillo Boccaccino, and the two artists also collaborated on the temporary decorations to celebrate the entrance of the Emperor Charles V into Cremona in 1541. Campi also worked as an architect, and as such was involved in the rebuilding and decoration of Santa Margherita in Cremona in 1547. Both Giulio and Antonio Campi received a number of significant commissions beyond Cremona, notably in Milan - where their work was to have an influence on the young Caravaggio - and in Brescia, where they painted a number of canvases for the Palazzo della Loggia from 1549 onwards. Giulio is likely to have made a trip to Rome in the middle of the 1550’s, and in 1557 undertook the fresco decoration of the first bay of San Sigismondo, for which he also painted an altarpiece in 1565. Near the end of his career he painted a several works for the Duomo in Cremona, notably the large organ shutters, and worked in the church of Santa Maria di Campagna in Piacenza.