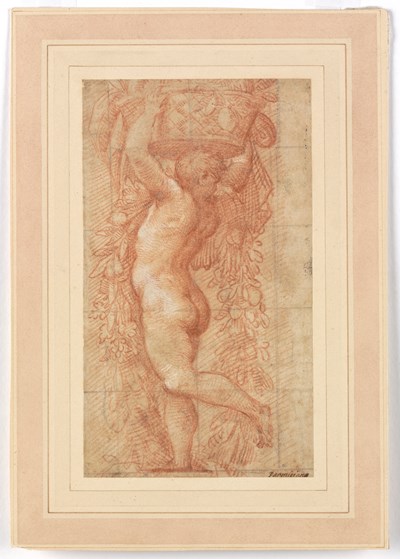 A Putto Carrying a Basket of Fruit Sold


Drawings in red chalk by Giulio Campi are rare. Theis is a preparatory study for part of the decoration of the abbey church of San Sigismondo, just outside Cremona, painted by Giulio Campi in 1542. The putto in this drawing appears as part of the decorative border on the right hand side of the transept, adjacent to a fresco of Saint Augustine. The drawing displays the particular influence on Campi of Parmigianino, to whom the sheet was in fact once attributed. This drawing was part of the Grand Ducal Collection of Saxe-Weimar-Eisenach at Weimar until 1918, when the grand duchy came to an end and the collection was divided between the Saxe-Weimar family and the Schlossmuseum in Weimar. The present sheet remained in the possession of a descendant of the Saxe-Weimar family until its appearance at auction in London in 1999.

A Putto Carrying a Basket of Fruit