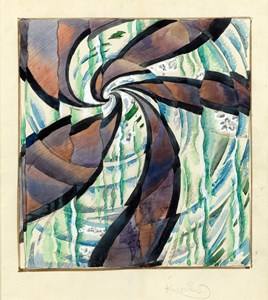 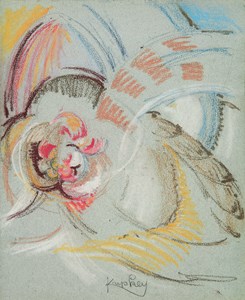 Born in Opocno in Bohemia, Frantisek Kupka was trained as a painter in Prague and Vienna. He settled in Paris in 1896, where he worked as an illustrator and poster designer. He began painting in a Neo-Impressionist vein, and in 1906 one of his paintings was shown at the Salon d’Automne. Shortly thereafter, Kupka began to be associated with a group of artists known as the Section d’Or – including Jacques Villon, Marcel Duchamp, Fernand Leger, Francis Picabia and Albert Gleizes – who were attracted to Cubism but at the same time wished to move beyond the largely monochromatic or muted tones of much Cubist work, in favour of a more radical use of colour. As a Czech artist living in Paris, however, Kupka remained somewhat apart from the art world of both his native country and his adopted city. He also tended to avoid any close association with many of the prominent artists of the day, in fear of losing his individuality, and preferred instead to work in relative isolation in his studio in Puteaux, outside Paris. After the Second World War, Kupka was engaged as a professor at the Academy of Fine Arts in Prague, although he kept his studio in Paris.Kupka may be regarded as one of the pioneers of abstraction. At the Salon d’Automne of 1912, he exhibited one of the very first purely abstract paintings to be seen in Paris; a painting of circular shapes of prismatic colours, leading the poet Guillaume Apollinaire, who noted musical qualities in the work, to label his style Orphic Cubism. (Passionate about music, Kupka felt that painting, like music, could be nonfigural.) As one pioneering American scholar noted in 1936, by 1912 Kupka ‘had painted what are probably the first curvilinear and the first rectilinear pure abstractions in modern art. In comparison with these conclusive and carefully considered achievements the slightly earlier abstractions of Kandinsky and Larionov seem tentative.’