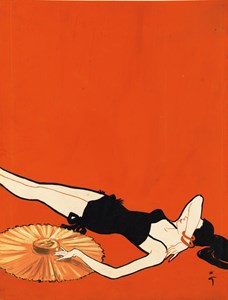 Born to an Italian nobleman and a French mother in Covignano, near Rimini, Renato Zavagli Ricciardelli, Conte delle Camminate, enjoyed a life of luxury as a child, living between Rimini, Milan, Paris and Monte Carlo. He displayed an innate talent as a draughtsman from an early age and, adopting his mother’s maiden name of Gruau, embarked on a career as an illustrator while still in his late teens. Settling in Paris in the early 1930’s, he soon found employment providing drawings of the latest fashions for the newspaper Le Figaro and the fashion magazine Femina. He also recorded the collections of such Parisian designers as Pierre Balmain, Jacques Fath, Jeanne Lanvin, Jean Patou, Elsa Schiaparelli, Cristobal Balenciaga and, in particular, Christian Dior, who was a close friend. Gruau worked closely with the couturier, designing numerous advertisements and posters for the atelier. Indeed, Gruau may be said to have helped to shape, to a large extent, the public image of the house of Dior, particularly during the period of the fashion designer’s brief independent career, between 1947 and his death ten years later. By the end of the Second World War Gruau’s reputation was firmly established, and had spread beyond France. He lived for several years in America, working for Harper’s Bazaar and Vogue in New York in the late 1940’s and in California for Flair. Although he had designed costumes and scenery for ballet companies in Paris, he declined offers to design costumes for Hollywood films. Following the death of Dior in 1957, Gruau largely abandoned the field of fashion illustration, and began providing designs for advertisements for such products as Martini, Lindt chocolates and Perrier, as well as theatre posters. In the 1980’s he returned to fashion illustration, working in Paris for Vogue France, Elle and Madame Figaro. A retrospective of Gruau’s work was held at the Musée du Costume in Paris in 1989, and at the city’s new Musée de la Publicité in 1999, while the following year a permanent exhibition of his work was inaugurated at the Museo della Città in the artist’s birthplace of Rimini.