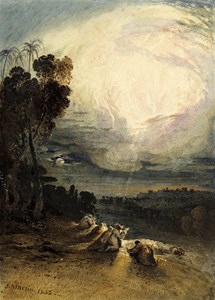 Born in Northumberland, John Martin was apprenticed to a coach painter in Newcastle until 1806, when he settled in London, finding employment as a glass and china painter. He aspired, however, to be a painter of grand historical and literary subjects, and in 1812 achieved his first measure of success when his painting of Sadak in Search of the Waters of Oblivion was accepted by the Royal Academy for exhibition, and was sold soon afterwards for fifty guineas. Nevertheless, in the early part of his career, Martin’s livelihood was earned with small-scale landscape paintings, watercolours and sepia drawings of a classical inspiration, or topographical views in the Home Counties and elsewhere. It was not until 1821, when his grandiose canvas Belshazzar’s Feast was exhibited to popular acclaim, as well as both critical and financial success, that Martin’s international reputation was firmly established. The dramatic compositions, imaginative effects and apocalyptic themes of Martin’s immense, visionary canvases of the 1820’s and early 1830’s – notably The Destruction of Pompeii and Herculaneum of 1822, The Seventh Plague of Egypt of 1823 and The Deluge of 1834 – captured the imagination of the viewing public. The artist’s celebrity was enhanced not only by the exhibition of these works, but also by the popularity of the prints that were published after (or inspired by) them, which were to eventually number more than 130. Indeed, in the late 1820’s and early 1830’s, Martin’s activity as a commercial printmaker provided a large portion of his income. Martin’s last major paintings were a series of three massive canvases depicting The Last Judgement, begun in 1845 but not completed until 1853. Arranged in the form of an enormous triptych, the paintings were exhibited very widely over the next quarter of a century; not only throughout Britain but in several cities in America and as far afield as Australia.