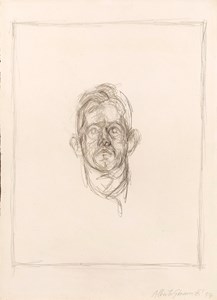 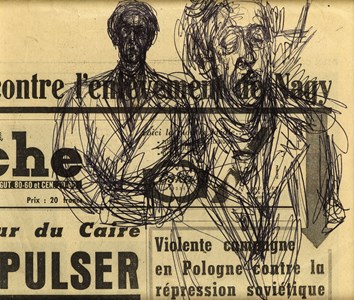 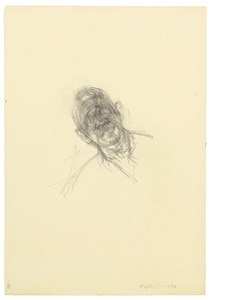 Alberto Giacometti regarded drawing as the foundation of all of his artistic activities. As his friend and biographer James Lord recalled, ‘“What I believe,” Alberto once said, “is that whether it be a question of sculpture or of painting, it is in fact only drawing that counts. One must cling solely, exclusively to drawing. If one could master drawing, all the rest would be possible.”’ Similarly, the art historian Michael Peppiatt has noted that ‘Throughout his career, drawing remained the most spontaneous and revealing of Giacometti’s very varied forms of expression, a constant diary he kept of the people in his life and the objects which fascinated him...Drawing served him as the most direct way of grasping reality (however evasive), of rehearsing a new concept, or attempting to solve problems which had surfaced in painting or sculpture. Drawing was the universal language, and Giacometti would refer to it as the essential source of his art, the matrix in which all forms originated.’ The artist Francis Bacon was a particular admirer of the drawings of his friend Giacometti, of whom he wrote in 1975, ‘For me Giacometti is not only the greatest draughtsman of our time but among the greatest of all time.’In the 1950’s Giacometti, who had previously only made portraits of close family members, began to produce portraits of a handful of other individuals with whom he had developed a close relationship, in particular several writers and critics. Jean Genet, Peter Watson, David Sylvester, James Lord and Isaku Yanaihara, as well as the photographer Ernst Scheidegger and the art dealer Marguerite Maeght, all sat for painted portraits by the artist. Many more friends and colleagues appear in Giacometti’s pencil drawings of the 1950’s and 1960’s, including Henri and Pierre Matisse, Aimé Maeght, Jacques Dupin, Igor Stravinsky, Donald Cooper and several others. As has been noted of such portrait drawings, ‘Many of these sheets can be counted among the most intense works Giacometti produced.’