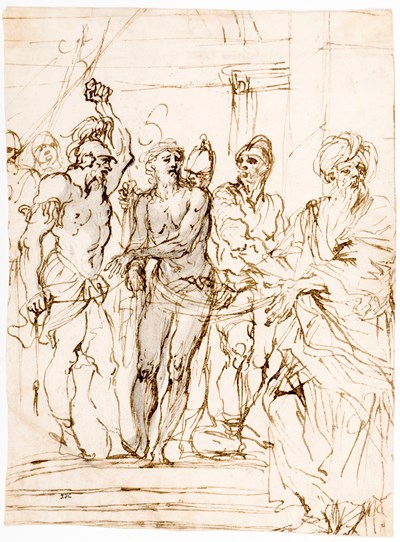 
The composition of this drawing by Aureliano Milani is similar to that of a painting by Agostino Carracci of the same subject, datable to 1589-1590, which is now in the Galleria Durazzo Pallavicini in Genoa4. (Indeed, the present sheet was at one time published as a preparatory study by Agostino Carracci for the painting in Genoa.) Carracci’s painting was recorded by the contemporary Bolognese biographer Carlo Cesare Malvasia as being in the Casa Melari in Bologna. Given Milani’s close study of the Carracci in his youth, this drawing is likely to date from the early part of his career, when he was working in Bologna.

The present sheet once belonged to the portrait painter and collector Thomas Hudson (1701-1779). From 1741 onwards, Hudson formed a significant collection of drawings and prints, many acquired from the 1747 sale of the collection formed by his father-in-law, Jonathan Richardson Senior. Hudson also collected Italian drawings of the 16th and 17th centuries. At the sale of his collection held in London in 1779, the auction catalogue described the drawings as ‘a Collection selected with acknowledged Taste, and forming, as it is presumed, a Cabinet of Drawings superior to any private Collection in this Kingdom.’