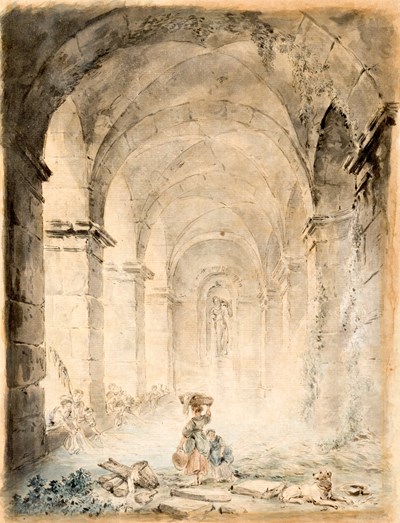 Laundresses at a Fountain at the Villa Aldobrandini in Frascati Sold


The Villa Aldobrandini at Frascati, some twenty kilometres southeast of Rome, was originally built in 1550 and renovated by Cardinal Pietro Aldobrandini from 1598 onwards. The extensive gardens of the villa were completed by the early 1620s, with several water features fed by a newly-built aqueduct. Hubert Robert produced several drawings of the Villa Aldobrandini and its gardens during his eleven-year stay in Italy between 1754 and 1765, and continued to make drawings inspired by the villa after his return to Paris.

The present sheet is closely related to a larger drawing of the same subject and composition, drawn in pen and brown ink and brown wash alone, in the collection of the Musée des Beaux-Arts et d’Archéologie in Besançon. Both drawings can in turn be associated with a red chalk drawing by Robert of washerwomen at a fountain in Frascati, dated 1775, in the Musée des Beaux-Arts in Valence, in which, however, the niche with a statue in the background seen in the present sheet is replaced with a tall doorway. The same setting, with some differences in architectural detail and staffage, occurs in an earlier counterproof drawing in red chalk by Robert, dated 1761, in the Bibliothèque Municipale in Besançon, while a small preparatory pen and ink sketch of the same view is part of an album of drawings by Robert in the Louvre.

Provenance:
Prince René of Bourbon-Parma, Copenhagen (according to a printed label pasted onto the backing board).

Laundresses at a Fountain at the Villa Aldobrandini in Frascati