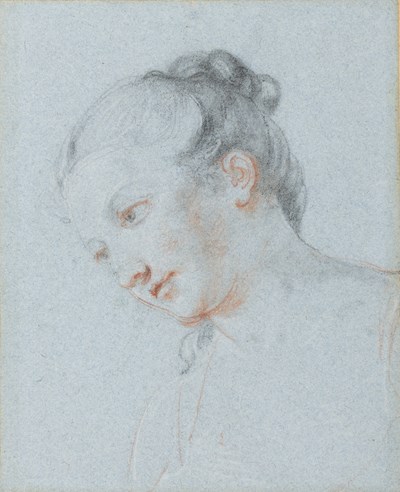 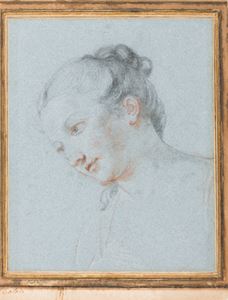 
Delicately drawn in a combination of black, red and white chalks on blue paper, the present sheet depicts a type of female head that is found throughout Charles-Joseph Natoire’s oeuvre as a painter. It would in particular appear to be a preparatory study for the head of a woman riding a donkey in his painting of Travellers Resting by a Fountain, one of a pair of large canvases executed in 1737 for the dining room of Louis XV’s petits appartements at the Château of Fontainebleau, and today in a private collection. The painting was one of a set of six canvases commissioned from Natoire for the King’s private apartments at Fontainebleau, where they remained until 1792. (Lost after the French Revolution, the paintings were only rediscovered some two hundred years later.) A closely-related painting of the same composition of Travellers Resting by a Fountain by Natoire, but horizontal in orientation, is in the Hood Museum of Art at Dartmouth College in Hanover, New Hampshire.

The only other known preparatory drawing by Natoire for the Travellers Resting by a Fountain is a red chalk study of the entire figure of the woman seated on a donkey, in the Staatsgalerie in Stuttgart. Among stylistically and technically comparable studies by Natoire are drawings of female heads in the collections of the Louvre and the Musée Fabre in Montpellier.

This drawing by Natoire once belonged to the little-known 18th century Parisian architect Claude-Guillaume Debesse (d. before 1786), who is recorded as living on the rue du Chantre in Paris by 1747. A good friend of the engraver Johann Georg Wille, who mentions him a number of times in his posthumously-published memoirs, and also dedicated an engraving to him in 1774, Debesse seems to have been an avid collector of drawings. (He is said to have sold several paintings at auction, so as to devote himself entirely to collecting drawings.) Both Debesse and Wille acquired drawings from the posthumous sale of the collection of the painter François Boucher in 1771, and Debesse is also thought to have made purchases at the sales of the collectors Armand-Frédéric-Ernest Nogaret in 1778 and Antoine-Joseph Dézallier d’Argenville and the Marquis de Calvière in 1779. In January 1786, following Debesse’s death, his collection was dispersed at auction in Paris. Fifty drawings bearing his collector’s mark are today in the Louvre, while other examples are in the Art Institute of Chicago and the Detroit Institute of Arts.