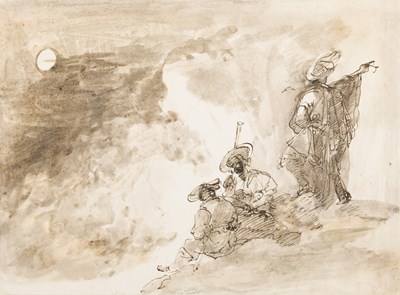 Three Figures in a Moonlit Landscape


As a draughtsman, Bison’s preferred medium was pen and ink, usually combined with rich tonal washes, of which this drawing is a particularly fine example. In its bold and spirited use of brown washes to depict the night sky, the present sheet may be compared with such drawings as A Goddess on her Chariot in an Italian private collection.

Moonlit scenes are, nevertheless, somewhat unusual in Bison’s drawn oeuvre. Another such example is a Landscape with Monumental Sculptures in a Park in the Cleveland Museum of Art, which has been tentatively related to Bison’s set designs for a production of Mozart’s Don Giovanni at the Teatro Nuovo in Milan in 1842.

Three Figures in a Moonlit Landscape