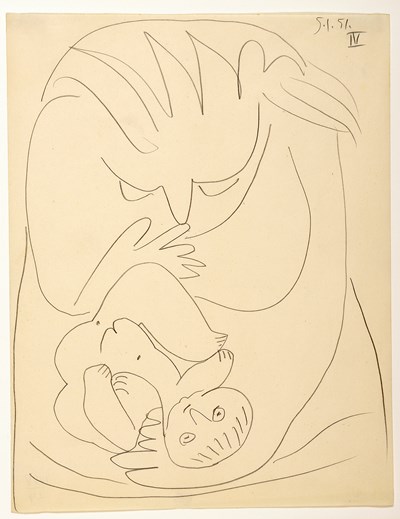 
Although motherhood and childhood are subjects that Pablo Picasso revisited throughout his career, the theme most notably presents itself in his oeuvre when the artist became a father himself. As his dealer and great champion Daniel-Henry Kahnweiler noted, ‘if one wanted to establish some sort of statistics of Picasso’s later subjects, it is quite certain that children would figure importantly. There is no esthetic reason for this. He has painted, drawn, etched, sculptured many children because he adores children, especially young ones…Even more so did he cherish and sketch his own children: Paulo, Maya, Claude, Paloma…The children painted or drawn by Picasso are of all ages. One can see them at every moment of their young lives. There are babies in the cradle, in their mother’s arms, children playing, Paulo riding a donkey, Maya with a little boat, Claude and Paloma with a little toy train.’

Many of Picasso’s earliest works on the theme of children date from the 1920s, following the birth of his eldest son Paulo in 1921. More paintings and drawings of children were produced in the late 1930s, with the birth of his daughter Maya (b.1935), and again in the late 1940s and early 1950s, with numerous depictions of Claude (b.1947) and Paloma (b.1949), his children with Françoise Gilot. However, although the three grandchildren born in Picasso’s lifetime – Pablo, known as ‘Pablito’ (b.1949), Marina (b.1950) and Bernard (b.1959), who were the children of his son Paulo - were close in age to his own children, there are very few portraits of them. The only drawings the artist made of one of his grandchildren were six sketches of his youngest grandson Bernard Ruiz Picasso as a newborn baby; all drawn on 9 November 1959 as a gift for the child and his mother, Christine Pauplin.

In her memoirs, the artist’s grandaughter Marina Picasso recalls that she and her brother Pablito were never the subject of one of Picasso’s works. As she writes, ‘There isn’t a single hint of our existence in his work, not one drawing or painting. When we went to La Californie [Picasso’s home and studio in Cannes, where he lived between 1955 and 1961], we would search for ourselves desperately on the walls, secretly flipping through the catalogues and art books, trying to find our features in a faun, a bacchanal, or the kaleidoscope of a still life. We came across studies and paintings of Maya, Picasso’s daughter with Marie-Thérèse Walter; sketches and portraits of Claude and Paloma, his children with Françoise Gilot; of fisherman, his tailor, people we didn’t know, dogs, cats, birds, lobsters, guitars, coffee pots, fruit bowls, jugs, leeks…but not a single sketch of us, his direct heirs.’

Drawn with a sharp pencil on January 5th, 1951, the present sheet is numbered IV and is one of a small group of drawings by Picasso of a mother and a female child, all drawn on the same day on successive pages of a sketchbook. The present sheet was followed, in the sequence of drawings made that day, by two closely related studies, numbered V and VI, which share the same provenance as this drawing. While this drawing depicts the mother holding her infant in her lap, the two subsequent images drawn later the same day show her bringing the child to its cradle, kissing her, and laying her down.

It may be argued that, despite their intimacy and charm, these three drawings - which were unknown to Christian Zervos when he published his monumental catalogue raisonné of Picasso’s work - lack the sense of evident affection found in Picasso’s more finished portrait drawings of his daughter Paloma, and of the artist and his family, which date from just ten days later. At the time these drawings were made, Picasso was supremely happy in his life with Françoise Gilot, and often drew his own children. Claude and Paloma were, however, by this time much older than the baby girl shown in the present sheet. As such, and despite Marina Picasso’s later protestations to the contrary, it may be tentatively suggested that this drawing, and the two related pencil studies executed the same day, may in fact have been drawn on a visit by Picasso to his new granddaughter, the infant Marina, who would have been less than two months old at the time.

The present sheet was until recently in the collection of Marina Ruiz Picasso, the only daughter of Picasso’s eldest son Paulo. Though her relationships with both her father and grandfather were extremely troubled, she was the only legitimate grandchild of the artist alive at the time of his death in 1973, and therefore received the largest inheritance, second only to that of Picasso’s second wife Jacqueline. Marina Picasso has also been the most vocal of the Picasso descendants in regards to her relationship, or lack thereof, with the artist; her memoir Picasso: My Grandfather details his neglect of her and her immediate family throughout his life.

Nevertheless, as Picasso’s biographer, the late John Richardson, has noted, Marina Picasso ‘differs from the artist’s other five heirs in that she has made a point of exhibiting as much as possible of her magnificent collection in a succession of traveling exhibitions…As Marina says, “despite the resentment I felt for my grandfather, I owe this to his memory”. And, for students of modern art in cities which have never seen a Picasso retrospective, these exhibitions have been a revelation.’ The present sheet from Marina Picasso’s collection, however, appears not to have previously been exhibited.

A photo-certificate from Claude Picasso, dated 15 May 2017, accompanies the present sheet.

Provenance:
The estate of the artist (No.5323)
By inheritance to the artist’s granddaughter, Marina Picasso, Cannes, Geneva and New York.