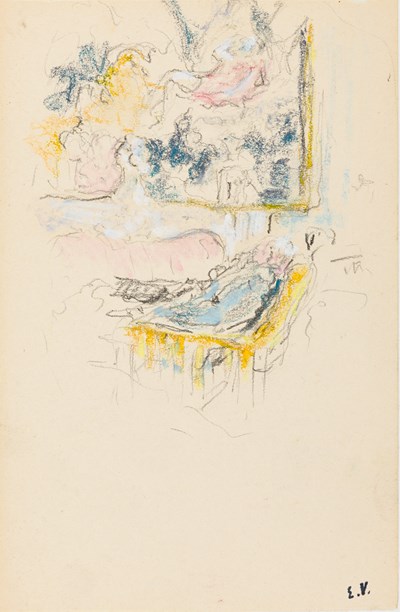 Jos Hessel in the Drawing Room at the Château des Clayes


Datable to the 1930s, the present sheet is drawn on a page from a sketchbook, and is typical of Edouard Vuillard's drawings made in preparation for an oil painting or pastel of a portrait or interior scene. This drawing is, in fact, a preparatory sketch for a larger, more refined pastel drawing of the same composition, which was until recently in the collection of the descendants of the art dealer Jos Hessel and is today also with Stephen Ongpin Fine Art.

The interior depicted here is the large drawing room or billiard room of the Château des Clayes, a château near Versailles which was the Hessel country estate. Jos (Joseph) Hessel (1859-1942) was Vuillard’s principal agent and dealer for the latter part of his career, while his wife Lucy Hessel was to be the artist’s muse, model and, most likely, lover for almost forty years.

The Hessels moved to the Château des Clayes in 1926, and Vuillard was to become a frequent visitor to the house, where he had his own room. Indeed, the château, conveniently close to Paris and with its large park and gardens designed by André Le Nôtre, became the artist’s rural retreat for the last decade of his life. In later years Jacques Salomon, the artist’s nephew by marriage, recalled of Vuillard at the Château des Clayes that ‘he was constantly drawing his friends, and those who found his eye upon them knew they must hold the pose in which he had caught them...I can still picture Vuillard at a social gathering. He would suddenly look intently at a group...with a direct stare. Then his face would grow grave, and without taking his eyes off his subjects he would whip his notebook out of his pocket...and, without hesitation, start to draw. He worked with great speed, scarcely glancing at his paper, entirely preoccupied by the sight before him.’

Provenance:
The studio of the artist, with the atelier stamp (Lugt 909c) at the lower right
Private collection, Paris.

Jos Hessel in the Drawing Room at the Château des Clayes