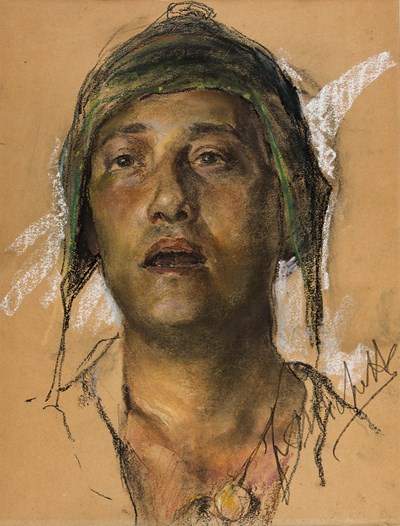 The Head of a Youth


As one Italian writer has aptly noted, ‘The Abruzzi landscape truly spoke to Michetti’s heart with its many voices; he heard them all and absorbed them all. The sea and the mountains, the local festivals so full of colour, of movement, of joy, the mystic processions, the pageantry of superstition and faith in the naves of the solemn age-old cathedrals and of the silent basilicas, the peaceful labour in the fields, the olive-clad hills, the people with their keen sensitiveness and their primitive tenacious passions, deeply impressed his feelings; in black-and-white or in colour, in innumerable marvellous drawings and in paintings of unforgettable beauty and imperishable interest he expressed the fascination, the poetry, the sweetness and the ruggedness, the character and the variety of those scenes. He was indeed a sublime interpreter of the Abruzzi and of their people, whose faces and souls he portrayed in fundamental and everlasting lines.’

This striking pastel study may be related to one of the seated onlookers in Francesco Paolo Michetti’s very large painting of The Daughter of Jorio of 1895, in the Palazzo della Provincia in Pescara, of which a somewhat smaller variant is in a private collection. The subject of Michetti’s painting was inspired by a scene he and his friend Gabriele d’Annunzio witnessed in the artist’s home town of Tocco di Casauria one summer day, when a young woman, dressed in red, was chased through the town square by a number of drunken farm labourers.

Several years after Michetti painted his work, the subject was adapted by d’Annunzio into the play La figlia di Iorio, written in 1903 and first performed the following year. The play, which takes place in the Abruzzi and contains dialogue in the Abruzzese dialect as well as local proverbs and rhymes, tells the story of a love between an outcast girl, accused of being a witch, and the shepherd Aligi, who is betrothed to a woman he does not love.

The present sheet would appear to be an unused or initial study for the head of the second man from the left4 in the finished painting of The Daughter of Jorio, for whom the model may have been the painter and musician Paolo De Cecco, another member of Michetti’s circle at the Conventino. A related grisaille study of what appears to be the same model as in the present sheet, more definitively related to the seated figure in the painting of The Daughter of Jorio, is in a private collection. A pen and ink study for the grisaille is in the Accademia di Belle Arti in Naples.

A similar youth in an identical cap also appears in Michetti’s design for the cover of the book Abruzzo forte e gentile: Impressioni d’occhio e di cuore by Primo Levi, published in 1883.

The Head of a Youth