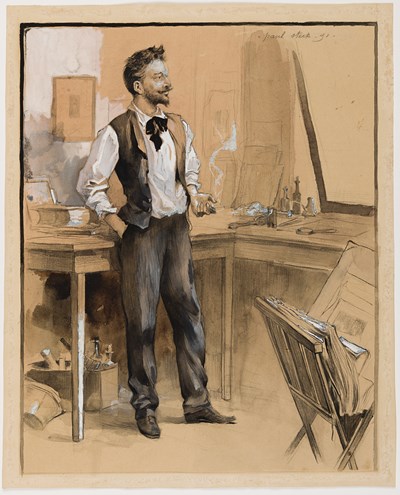 Portrait of the Artist Félicien Rops in his Studio


The present sheet is a portrait of the Belgian painter, printmaker, draughtsman, and illustrator Félicien Rops (1833-1898) in his studio. Dated 1891 and apparently presented to the sitter the following year, this drawing was used for the cover of the illustrated weekly magazine La Vie populaire published on the 17th of September 1891. The same image was used again a few years later to illustrate a special issue - devoted to Rops - of the literary and artistic review La Plume, which appeared on 15 June 1896.

Paul Steck produced a small number of portrait drawings and prints of fellow artists in the 1890s. A drawing of the painter Henri Gervex (1852-1929) seated at an easel in his studio and dated the same year as the present sheet, was sold at auction in Paris in 2016. Steck also engraved a portrait of the artist Georges Antoine Rochegrosse (1859-1938), standing with a palette and brushes in his hand.

A drawing by the artist Paul Mathey (1844-1929) of Félicien Rops examining a newly printed sheet in his workshop is in a private collection in London. Drawn in 1888, a few years before Steck’s portrait, the Mathey drawing was a study for a painting which was reproduced alongside the present sheet in the 15 June 1896 issue of La Plume.

Provenance:
Given by the artist to Félicien Rops, Paris, in 1892
Private collection.

Portrait of the Artist Félicien Rops in his Studio