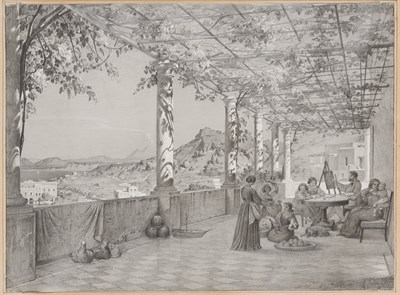 Graphite on coated paper, with scratched highlights, with framing lines in pencil and laid down on a 19th century mount.
Signed M. Hauschild at the lower right.
Inscribed and dated Andenken an die Villa Tagliaferro auf Ischia. 1853. on the mount.
A blindstamp of the paper manufacturer at the lower right.
Further inscribed “Restaurierung von J. Wackwitz” / 1976 and stamped twice with a business address stamp for Jürgen Wackwitz, on the reverse of the mount.
239 x 324 mm. (9 3/8 x 12 3/4 in.)


Dated 1853, this charming drawing depicts the artist at work, surrounded by his family, on the terrace of the Villa Tagliaferro in the town of Casamicciola Terme, on the north shore of the island of Ischia. Max Hauschild portrays himself seated at an easel, accompanied by women, children and pets, on the shaded terrace of the villa, overlooking the sea and the Italian mainland, with Vesuvius in the distance.

The Villa Tagliaferro no longer exists, and is likely to have been destroyed in the earthquake of 28 July 1883, when much of Casamicciola was left in ruins. The French writer and politician Alphonse de Lamartine stayed at the Villa Tagliaferro three times, in 1811-1812, 1820 and 1844, and there wrote his novel Graziella, which was first published in serial form in 1849 in his book Les Confidences. As he writes, ‘The island of Ischia, which separates the Gulf of Gaeta from the bay of Naples, and which is itself only separated from the isle of Procida by a narrow channel, is merely one singular perpendicular mountain whose white brow plunges its jagged teeth into the sky. Its steep sides, furrowed by glens, ravines, and beds of torrents, are covered from top to bottom with the dark-green foliage of chestnut-trees. Those of its plateaux which are nearest the sea and inclined towards the waves, are crowned with thatched cottages, rustic villas, and villages half hid beneath luxuriant vines…There is not one of those houses suspended to the slopes of the mountain, hid at the bottom of its ravines, shooting up like pyramids on the top of its plateaux, leaning against its wood of chestnut-trees, shadowed by its cluster of pines, surrounded by its white arcades, and festooned with its hanging vines, which has not been the ideal dwelling, in dreams, of a poet or lover.’