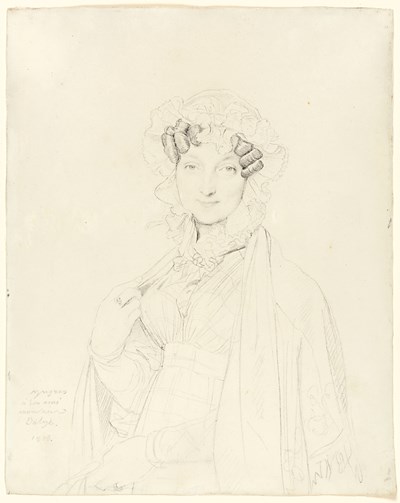 
Ingres had a remarkable ability of vividly capturing, with a few strokes of a sharpened graphite pencil applied to smooth white or cream paper, the character and personality of a sitter. As one 20th century artist has written of him, ‘Ingres’ portrait-drawings are unique in the history of art in so far as their finished nature, expressed through black and white, is a composite of light, shade and tone.’ For his drawn portraits, Ingres used specially prepared tablets made up of several sheets of paper wrapped around a cardboard centre, over which was stretched a sheet of fine white English paper. The smooth white paper on which he drew was therefore cushioned by the layers beneath, and, made taut by being stretched over the cardboard tablet, provided a resilient surface for the artist’s finely-executed pencil work.

Drawn from life, over a period of not more than a few hours, Ingres’s portrait drawings may be counted among his finest and best-known works. Around 460 portrait drawings by Ingres are known today, most of which date from before 1824, when he left Italy and returned to France. Relatively few portrait drawings can be dated to the artist’s later Parisian years, of which the present sheet is a particularly fine example.

The sitter of this portrait drawing, Marie-Anne-Adélaïde Balze, née Samat (1783-1842/3), was the wife of Joseph Balze (1781-1847), who served as grand chamberlain to King Charles IV of Spain during his exile in Rome between 1811 and 1819. It was in Rome that Joseph Balze first met Ingres, from whom he commissioned some works around 1814. A lifelong friend of the artist, Balze continued to aid Ingres after his return to Paris from Rome in 1824, finding him several significant commissions.

This charming portrait of Mme. Balze was drawn in Paris in 1828, after the Balze family had returned to France. As Hans Naef has described the present sheet, ‘If one can recognize men by their wives, the portrait of Mme. Balze reflects the most beautiful light on her husband. The feminine charm of her posture and her features are evidently due not only to a favourable appearance, but also to the grace of her disposition.’ Two years after this drawing was made, the sitter’s young sons Paul (1815-1884) and Raymond (1818-1909) entered the studio of Ingres as pupils and assistants. They grew to be very close to the artist, who treated them almost like sons, often addressing them as ‘cher enfants’, even when they were grown men.

In the same year of 1828, Ingres also made a portrait drawing of Mme. Jean-Baptiste Hinard, née Marianne-Françoise-Stanislas Balze, the sister of Joseph Balze and sister-in-law of the present sitter, which is today in the Museum Boijmans Van Beuningen in Rotterdam. The portrait drawings of Mme. Balze and Mme. Hinard are very similar in attitude and execution and almost identical in size, and appear to have been executed as pendants. As one scholar, writing in 1911, noted of these two drawings, ‘[Ingres] made two lovely portraits in pencil for his friend, which are preserved like two treasures in the Balze family.’ Yet although Ingres produced splendid drawn portraits of the wife and sister of Joseph Balze, to whom he dedicated them, he never seems to have made one of Balze himself.

An autograph, traced version of the present sheet, drawn on papier calque, is in the collection of the Harvard University Art Museum in Cambridge, Massachusetts. As Agnes Mongan has noted, ‘it was not unusual for Ingres to make a tracing of a portrait of a close friend’, and the Fogg drawing seems to have been given by Mme. Balze in 1842 to her friend Mme. de Madrazo, the mother of another of Ingres’s pupils, the painter Federico de Madrazo.

Among closely comparable drawings of the same date is a portrait said to be of a Mme. Brazier, today in the collection of the Musée des Tissus et des Arts Décoratifs in Lyon. As has been noted by the costume historian Aileen Ribeiro, in his drawn portraits of women, who were usually depicted seated, ‘Ingres’s main concern…was with fashionable French dress, and particularly the freedom and scope offered by everyday costume, the kind of clothes in which his sitters could relax.’8 Referring to the present sheet in particular, Ribeiro has added that ‘it was probably natural that Ingres preferred to depict relatively simple styles of dress which could act as a foil to the face and headwear of his portrait drawings. Two portraits dated 1828, one believed to be of Madame Brazier and the other of Madame Joseph Balze, show sitters in modest day dresses. Madame Balze’s dress is a check fabric, fitting fairly tightly to the figure…Women of the most fashionable sort arranged their hair in sausage-like curls with a large bun on top of the head, known as an Apollo knot…Indoors, around the house, women wore caps of linen or cotton trimmed with lace and ribbons…The wonderful cream-puff confections that both Madame Brazier and Madame Balze wear on top of their prominent curls, serve to give the impression of heads rather too large for their accompanying bodies; this may reflect either Ingres’s concentration on the face and its immediate surroundings, or the particular attention devoted to hairstyles and headwear in the fashion plates of the period.’