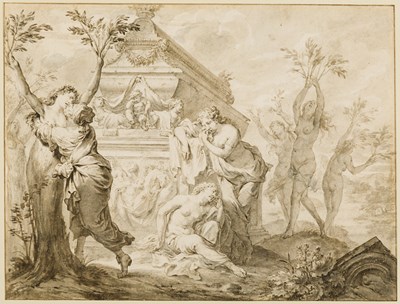 The Sisters of Phaeton Transformed into Poplars


This drawing, the last in the series of four drawings by Godfried Maes, depicts Phaeton’s seven sisters, the Heliads, mourning the death of their brother, and being transformed into poplar trees:

‘Clymene, having uttered whatever can be uttered at such misfortune, grieving and frantic and tearing her breast, wandered over the whole earth first looking for her son’s limbs, and then failing that his bones. She found his bones already buried however, beside the riverbank in a foreign country. Falling to the ground she bathed with tears the name she could read on the cold stone and warmed it against her naked breast. The Heliads, her daughters and the Sun’s, cry no less, and offer their empty tribute of tears to the dead, and, beating their breasts with their hands, they call for their brother night and day, and lie down on his tomb, though he cannot hear their pitiful sighs.’

‘Four times the moon had joined her crescent horns to form her bright disc. They by habit, since use creates habit, devoted themselves to mourning. Then Phaethüsa, the eldest sister, when she tried to throw herself to the ground, complained that her ankles had stiffened, and when radiant Lampetia tried to come near her she was suddenly rooted to the spot. A third sister attempting to tear at her hair pulled out leaves. One cried out in pain that her legs were sheathed in wood, another that her arms had become long branches. While they wondered at this, bark closed round their thighs and by degrees over their waists, breasts, shoulders, and hands, and all that was left free were their mouths calling for their mother. What can their mother do but go here and there as the impulse takes her, pressing her lips to theirs where she can? It is no good. She tries to pull the bark from their bodies and break off new branches with her hands, but drops of blood are left behind like wounds. ‘Stop, mother, please’ cries out whichever one she hurts, ‘Please stop: It is my body in the tree you are tearing. Now, farewell.’ and the bark closed over her with her last words. Their tears still flow, and hardened by the sun, fall as amber from the virgin branches, to be taken by the bright river and sent onwards to adorn Roman brides.’

Perhaps intended as book illustrations or designs for prints, these highly refined drawings by Maes were never reproduced or published in his lifetime. In 1717 the artist’s widow sold all the drawings to the artist Jacob de Wit, who later used some of them as models for his own designs for illustrations, engraved under the supervision of Bernard Picart, for a 1732 translation of The Metamorphoses into Dutch, French and English editions. One of the Maes drawings that de Wit copied and adapted for the 1732 Metamorphoses was the present sheet of The Sisters of Phaeton Transformed into Poplars, which appears in reverse in the engraved illustration in the published book.

The original drawings by Godfried Maes remained together until 1762, when they were dispersed at auction in Amsterdam.

The Sisters of Phaeton Transformed into Poplars