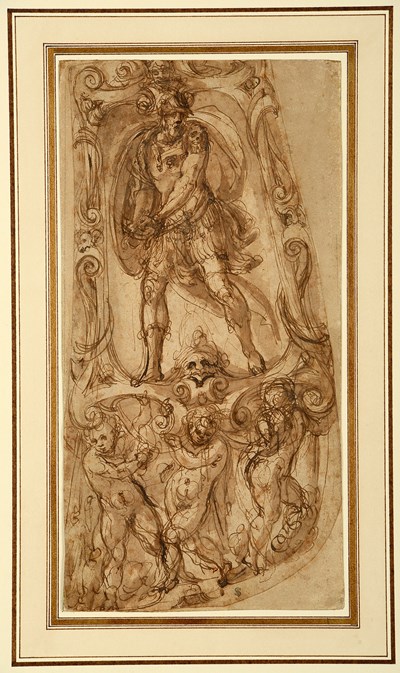 Study for Armour: A Warrior (Mars?) in an Elaborate Frame Supported by Putti Sold

Pen and brown ink and brown wash.
The sheet irregularly trimmed at the left and right edges, and laid down onto another sheet.
Faintly inscribed Tadeo Zuccaro on the backing sheet.
Further inscribed (by Sewell) TADDEO ZUCCARO 1529-1609 / Collection: Earl Spencer (Lugt 1530) / Is this the decoration of a triumphal car / or some other temporary element? The / cut out shape is very odd. on a label pasted onto the the former backing board.
241 x 123 mm. (9 1/2 x 4 3/4 in.) at greatest dimensions.


The unusual shape of this spirited pen and ink drawing has led to the suggestion that it may represent a design for part of an elaborate suit of embossed all’antica parade or pageant armour. A product of the Late Renaissance, highly ornamented parade armour was the result of a renewed interest in ‘the splendid decorative armor described in ancient literature and shown in ancient sculpture, worn by victorious generals in triumphal processions.’ The relief decoration of such armour would have been embossed into the metal, thus achieving a highly decorative, rather than defensive, result. Suits of parade armour of this type may be found in the Wallace Collection in London, the Real Armería de Madrid and the Metropolitan Museum of Art in New York.

The present sheet was likely drawn in the last quarter of the 16th century, and the grotesque mask in the centre of the composition, as well as the scrollwork surrounding the cartouche, are drawn from classical motifs. The figure in the centre of the drawing, depicted in full armour with his shield, almost certainly represents Mars, the Roman god of war; a particularly apt motif for a piece of armour. The design depicted is likely to have been used for part of a breast plate or a gauntlet in a suit of armour, but could also possibly have been intended as decoration for a related object, such as a shield.

As one scholar has noted, referring to an ornate suit of half-armour produced around 1570 by the Milanese master armourer Lucio Piccinino, ‘Every element - even in areas that would ordinarily be covered up by the overlapping of the plates - is decorated with luxuriant designs in relief, drawn from the classical repertory…These feature Medusas, satyrs, sphinxes, putti, bound captives, anthropomorphic lion masks, and figures of Mars and Victory - all derived, or rather adapted, from antique art, for both the choice and execution of these motifs betray a fascination for the grotesque that is characteristic of the mannerist phase of the Renaissance.’

Provenance:
The Hon. John Spencer, Althorp, Northamptonshire
By descent to George John, 2nd Earl Spencer, Althorp, Northamptonshire (Lugt 1530)
His sale (‘A Superb Cabinet of Drawings; The Entire Collection of a Nobleman: Formed with Refined Taste and Judgement, about the Middle of the Last Century...’), London, T. Philipe, 10-18 June 1811, lot 837 (as Taddeo Zuccaro: ‘A warrior standing within a grotesque ornament – free pen and bistre’), sold for £0.2.0 to Coxe
Brian Sewell, London.

Study for Armour: A Warrior (Mars?) in an Elaborate Frame Supported by Putti