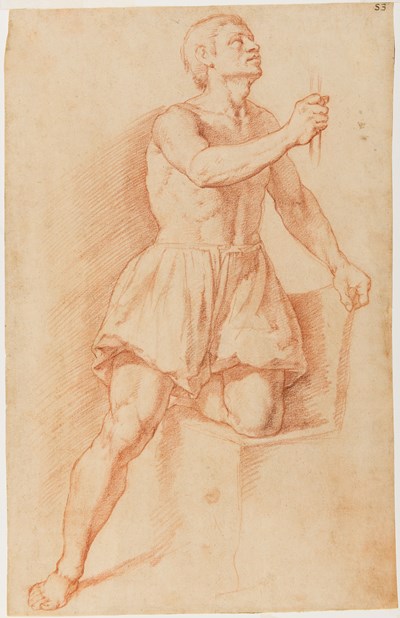 
Although it remains unconnected to any surviving work by the artist, the present sheet is a fine example of Bartolomeo Cesi’s figure studies, which are often drawn in red chalk on blue or buff paper. Inspired by the example of the Carracci, Cesi produced preparatory figure studies for his paintings that were invariably drawn from life, using models – probably workshop assistants - posed in his studio. (Indeed, Cesi’s drawings have often in the past been attributed to one or another of the Carracci, although his drawings may be distinguished by a somewhat lighter application of chalk.) Malvasia writes of Cesi that his drawings of single figures - ‘drawn from the model with so much assurance and facility’, as he writes - were more popular with the collectors of his own day than the artist’s composition studies. He adds that, although Cesi always worked from a posed model, due to his innate modesty he almost never drew studies of nudes or anatomical studies, unlike the Carracci.

This drawing was formerly laid onto a 17th or early 18th century Italian mount which bore an attribution to the Florentine artist Matteo Rosselli (1578-1650). Indeed, the drawing displays striking similarities with the work of Tuscan artists of the late 16th and early 17th centuries. As Nancy Ward Neilson has noted, ‘Cesi’s drawing style…is as strongly indebted to Tuscan draughtsmanship – to, for example, that of Jacopo da Empoli – as to any other precedent. Further, Bartolomeo is also documented in Tuscany in the 1590’s, specifically in Siena in 1594 where he was at work in the Certosa di Maggiano. Doubtlessly, Cesi’s experience of Rome and Tuscany were fundamental in his formation of a clear, austere reform style, one which became evident by the 1590’s...’

A stylistically comparable red chalk study of a reclining male nude is one of several drawings by Bartolomeo Cesi in the collection of the Martin von Wagner Museum in Würzburg, while a drawing of Two Youths Embracing in the Uffizi is also similar to the present sheet, as is a study of a Male Nude Holding a Pole in the Koenig-Fachsenfeld collection at the Staatsgalerie in Stuttgart.

Cesi often used the same models repeatedly, and the distinctive physiognomy of the youth in the present sheet – who is likely to have been a garzone, or studio assistant - is found in several other drawings by the artist, including a study of an apostle in the Louvre and two others at Christ Church in Oxford.