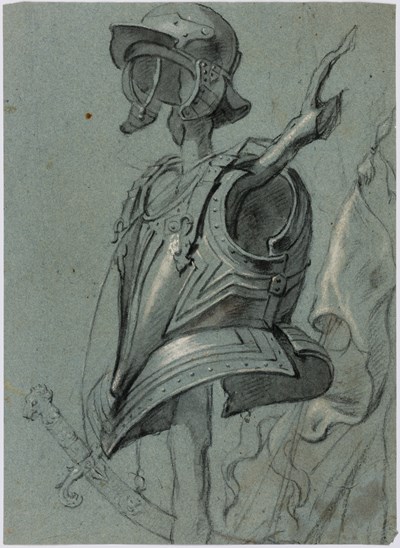 A Trophy of Armour on a Tree Branch


The present sheet is attributed to Erasmus Quellinus the Younger. Chalk drawings by the artist are relatively rare, but the present sheet may be likened to two drawings in black chalk on blue paper by or attributed to the artist: a study of The Madonna and Child in the collection of the Harvard Art Museum and a Ceiling Design with Putti which recently appeared at auction. Similar military trophies are found in a very large signed drawing by Quellinus of a design for a triumphal arch, datable to c.1657, in the Hermitage in St. Petersburg, which was a project for a temporary façade for a building on the processional route of Don Juan of Austria, the new governor of the Spanish Netherlands, on his ceremonial entry into Antwerp on 6 May 1657.

Comparable trophies are also found atop a colonnade in the background of a small panel painting of Cybele (Rhea) by Quellinus, signed and dated 1663, in a Belgian private collection. The painting later served as a design for the frontispiece, engraved by Richard Collin, of Engelbert Flacchio’s 'Genealogie de la très-illustré, très-ancienne et autrefois souveraine maison de La Tour, où quantité d’autres familles trouveront leur extraction et parentage', devoted to the history of the Thurn und Taxis family and published in 1709.

In the context of military trophies like that depicted on the present sheet, it is also interesting to note that Quellinus assisted Rubens in making painted copies after some of Andrea Mantegna’s Triumph of Caesar paintings, now at Hampton Court, in which similar motifs appear.

A Trophy of Armour on a Tree Branch