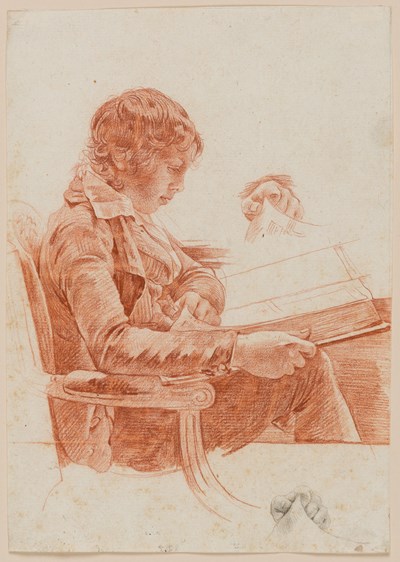 The Artist’s Son Michel-Martin Reading, with Two Studies of His Left Hand


Datable to c.1800, this is a portrait of the artist’s son, Michel-Martin Drolling, who was also to become a painter. Martin Drolling produced several painted and drawn portraits of his son, and Michel-Martin also posed for a number of his father’s genre paintings. He is, for example, depicted in a painting of a young boy holding a violin and leaning out of a window, signed and dated 1800, in the Los Angeles County Museum of Art. He also seems to have been the model for the sleeping boy in Drolling’s painting Le Petit Dormeur, signed and dated 1795, which appeared at auction in London in 1995.

A large portrait drawing by Martin Drolling of his wife Louise-Élisabeth Belot and their son Michel-Martin, drawn in black chalk on vellum, is in the collection of the Musée Magnin in Dijon, which also houses a later painted portrait of the artist’s daughter Louise, executed c.1805-1810.

The subject of this drawing, Michel-Martin Drölling (1786-1851), studied with his father and completed his training in the studio of Jacques-Louis David. He won the Prix de Rome in 1810 with a painting of The Wrath of Achilles, and spent the next six years as a pensionnaire at the Academie de France in Rome. The younger Drolling exhibited regularly at the Salons between 1817 and 1850. Much of his early career was taken up with portraiture and with small-scale pictures such as the Orpheus and Eurydice, which won a gold medal at the Salon of 1819. Admitted into the Académie in 1833, Michel-Martin Drolling received several important decorative public commissions, including paintings for Notre Dame de Lorette and the Conciergerie in Paris and the cathedral of Saint-André in Bordeaux. In 1850, near the end of his career, he completed a series of paintings of the life of Saint Paul for the church of Saint-Sulpice in Paris.

Provenance:
The studio of the artist, Paris
Part of an album of drawings belonging to the artist’s descendants
Art market, Belgium, in 1997
Galerie Arnoldi-Livie, Munich, in 1999
Bernd Schultz, Berlin.

The Artist’s Son Michel-Martin Reading, with Two Studies of His Left Hand